Short
The Golden Axe is an axe in Final Fantasy XII. It is the strongest axe, though it is not the strongest weapon in its general category, which also includes hammers. Axes and hammers use the same damage formula, but axes have a marginally smaller charge time and slightly more evasion, but with a lesser chance of triggering a combo. The Scorpion Tail is 9 greater in attack in the original version, but only 4 greater in the Zodiac versions (and the combo rate of axes and hammers has been changed so the difference is more negligible). However, even if the Golden Axe could be considered to rival the Scorpion Tail in utility in the Zodiac versions, the added Vrscika is a more powerful hammer.

It can be made in the bazaar, although this isn't the only way to get it. To make it in the bazaar the player needs to sell two Electrums and Broken Greataxes, and a Mardu Halcyon. Electrums are obtained from various entites, as well as as a Clan Reward from Montblanc for slaying a Demon Wall. Broken Greataxes are obtained from Giruveganus, and Mardu Halcyons from Mardu Entite.

In the original version, Golden Axe's license costs 40 LP. In the Zodiac versions, it costs 65 LP and can be used by the Foebreaker.

Vaan wields the Golden Axe in his attacks when in EX Mode. Vaan's weapons are from Final Fantasy XII, and his normal and EX Mode weapons are among the weakest and strongest equipment in their respective equipment types. 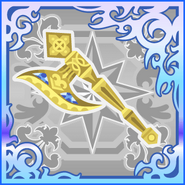 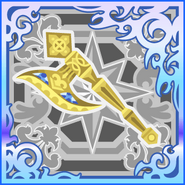 Golden Axe is a weapon.