Gold chocobo (金チョコボ, Kin Chokobo?) is a recurring type of chocobo introduced in Final Fantasy VII. They are the rarest and most powerful breed of chocobo, able to cross any type of terrain.

The gold Chocobo, known as the Ocean Chocobo, is the best outcome of the Chocobo breeding sidequest, resulting from breeding a black Chocobo with a "wonderful" yellow Chocobo using a Zeio Nut. Once the player has two gold Chocobos of opposite genders, they can be bred to produce additional gold Chocobos, although one is enough to get all rewards available in the game. The gold Chocobo can cross all types of terrain and so can reach the Round Island where the Knights of the Round Materia is. When racing in the Gold Saucer Chocobo Square, gold Chocobos generally have the highest stats and are unaffected by course hazards.

Aside from breeding, the player can acquire a gold Chocobo by defeating Ruby Weapon and giving the item it drops, the Desert Rose, to the Kalm traveler. However, a gold Chocobo obtained this way has poor stats for racing compared to bred gold Chocobos.

The gold-colored Sky Chocobo is Choco's final evolution. The player must locate the six Chocograph pieces in Chocobo's Forest and Chocobo's Lagoon, completing the Mist Ocean chocograph that holds the sky upgrade. The golden Choco can enter Chocobo's Air Garden and fly across the sky and land in any forest, homage to how flying chocobos worked in Final Fantasy V. This enables him to access remote islands that lack a coastline, as well as the Forgotten Continent. Choco may also enter a new location known as Chocobo's Air Garden, where the game's most challenging superboss, Ozma, awaits.

It is rumored that some early print versions of Final Fantasy IX have a "Gold Chocobo bug", in which the player could obtain the golden Choco before the airship, allowing some parts of the story to be skipped. However, due to the absence of legitimate evidence demonstrating this, it is considered to be a hoax.

The Gullwings raise chocobos in the Calm Lands Ruins with the aid of Clasko. The process leads them to the Ruin Depths, where they discover the Amazing Chocobo, a fantastic chocobo with bright-yellow plumage. Though the chocobo attempts to flee, Clasko tames it. Although the party cannot ride it, Clasko is sometimes seen riding it while it is flying. The party can use it to search for items without it running away like other chocobos; alternatively it can be sent to support other chocobos. Though the chocobo will not flee, it can get tired. Placing the Amazing Chocobo on "Standby" will let it rest, allowing it to better perform support or search actions. In Final Fantasy X/X-2 HD Remaster, securing the Amazing Chocobo earns the Trophy/achievement Chocobo Whisperer.

The player can open a hidden container to find a Golden Chocobo in A Dying World 700 AF. It is among the top Commando type Paradigm Pack monsters and one the best contenders in the Serendipity chocobo races. It doesn't stand out as much as in other games as it is overshadowed in racing by the Silver Chocobo and matched in battle by the Red Chocobo as a Commando, though with different specialties. Golden Chocobo is one-of-a-kind monster.

The player can dye their chocobo golden yellow at Wiz Chocobo Post, but the effect is merely cosmetic. New dyes become available from finding fruits during racing, and from completing quests for Wiz.

The party's car, Regalia, has a special "Gold Chocobo" skin

The golden chocobo appears in select events alongside several red chocobos. They yield rare abilities or summons that pertain to the event. One needs to feed all of the red chocobos Vomp Carrots prior to finally feeding the gold chocobo its own Vomp Carrot. In rare instances, simply feeding it Gysahl Greens may result in a rare ability or summon. 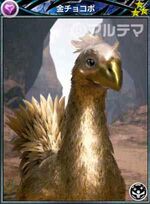