A sword from a faraway world. True to it's name, it is made entirely of gold, shimmering brilliantly from blade to hilt. It is said To be one of several belonging to the likewise golden-armored master of Goldor Manor, who keeps them locked away in treasure chests lying around the mansion.

Gold Sword (ゴールドソード or きんきらのつるぎ, Gōrudo Sodo or Kinkira no Tsurugi?), also known as Gold, Shiny, or Golden Sword, is part of the gold equipment set. It is a recurring weapon in the series.

Golden Sword is the weakest sword, providing a mere 5 Attack, but sells for 2,500 gil. Only eleven exist, all found in the Goldor Manor. They can be equipped by the Onion Knight, Freelancer, Warrior, Red Mage, Knight, and Dark Knight classes.

Gold has a sword icon before its name. It can be bought for 11000 GP in Lynn's Village, Guardian's Town, Venus' City, or found in Undersea Volcano. It has 50 uses, it also increases a Robot's HP by 63 and increases their Str by 14. The damage formula for Gold is the user's Str x11.

Gold has a sword icon before its name. It has an attack power of 35 and it can be bought for 1100 G at Muu in the Present.

The Gold Sword is one of the Onion Knight's unlockable weapons, while in his default form. It can only be obtained, alongside the Kikuichimonji blades and Omnirod, by purchasing them as DLC from the PlayStation Store. Having it equipped carries no advantages or disadvantages.

Golden Sword (FFIII) is a sword that provides 5 ATK. It can be obtained during the Final Fantasy III event, Goldor Manor - Exploration. It can be sold for 25,000 gil.

A sword made of gold.

The Golden Sword is a sword within the Forsaken Dungeon. It provides 62 Weapon Atk, 8 Durability, -2 Speed, and -2 Consumption Rate. 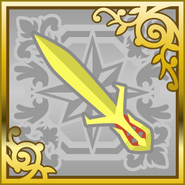 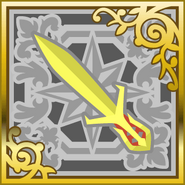