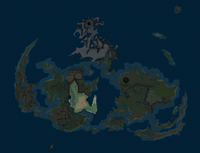 The Gold Saucer is connected to the Corel Area via a river with shallow enough water for the buggy to cross, and Mt. Corel whose foot North Corel sits, providing a path through. A river separates it from both the Gongaga Area and Cosmo Area, although the river can be crossed into the Gongaga Area via buggy. Mountains also separate it from the Nibel Area and North Corel Area. The mountain separating it from the Nibel Area contains Lucrecia's Cave, which is hidden behind a waterfall.

The Corel Desert cannot be traversed on foot, and requires a buggy or certain chocobos. If one goes to the center of Corel Prison with the buggy, they can enter the Corel Desert field area where can fight Land Worm and Cactuar, but at this time the player cannot return to Corel Prison and can only exit back onto the world map.

The chocobo tracks in this area is the only place chocobos with a "Good" rating can be encountered with a pair of Spencers, or a pair of Flapbeats if they're behind the Chocobo.

When Ultimate Weapon starts roaming the world, above North Corel is one place where it can stop. The actual encounter appears to take place on the ground by the Corel Reactor.

After defeating the Ultimate Weapon (and engaging in one more battle), Ruby Weapon appears in the desert. Colliding with it in Highwind or chocobo will set off an encounter. At first just its head will stick out the sand, but after engaging with it, it emerges from the sand, and if one escapes, it remains that way until one enters the field.

The Beachplugs on the beaches can teach the Big Guard Enemy Skill when manipulated. The Harpy fought besides Chocobos, and on the desert terrain when driving the buggy, can teach the party Aqualung.