The Gold Saucer is a field map in Final Fantasy VII, found in the middle of the desert in the Gold Saucer Area on the western continent. It is first visited in "Sanctuary of Amusement", and later revisited for "Secret Date". The area has a large number of minigames, many of which are required to procure powerful equipment and items.

The games in the Gold Saucer use GP (Gold Points) as a currency instead of gil, a currency only won in minigames or traded for outside the saucer. The Gold Saucer is divided up into seven attractions, most of which have different minigames. The most notable of these are Battle Square and Chocobo Square.

Gold Saucer is located to the southeast on Gaia's western continent. It is accessed via the ropeway in North Corel. It appears on the Corel Desert on the world map, but cannot be accessed from the world map.

Gold Saucer is reached via a free cable car from North Corel. There is a save point here, but it requires 5 GP to use (the player can avoid paying the fee with the save point glitch). The entrance fee is 3,000 gil, but a lifetime pass can be bought for 30,000 gil. A man standing next to the small house will exchange 1 GP for 100 Gil, to a maximum of 100 GP for 10,000 gil per turn. The GP man is only available when the Gold Saucer reopens after the player gets the Highwind and appears rarely (appearance rate is around 15%). A player can more conveniently encounter the GP man repeatedly by entering and exiting the "Welcome" entrance of the Ropeway Station.

The station is the main hub of locations in the center of Gold Saucer. From here, a map shows the location of each square in relation to the shape of Gold Saucer.

The attraction here os the Shooting Coaster minigame. The player can participate to earn some prizes as items.

During the story Dyne goes on a rampage at the Battle Square and murders several Gold Saucer employees. Cloud and his party are captured and dropped into Corel Prison shortly afterward.

In exchange for 10 GP the receptionist will allow one of the three party members to fight in the Battle Arena. The character has to fight through eight consecutive battles with steadily harder groups of enemies. After each turn the player turns a slot and receives one of the handicaps that are on the reels (though equipment, such as Ribbons, can prevent these effects). For each fight won, the player receives BP (Battle Points). These can be exchanged for prizes at the counter, including Cloud's ultimate Limit Break.

During the story, to leave Corel Prison, Cloud must race on a Chocobo and win to be allowed leave. After he succeeds, the party is granted pardon and allowed to leave the Saucer.

Afterwards, the player can compete with any Chocobo they own in the Chocobo Farm stable. Ranking up in the races gives access to better rewards of items and Materia.

Ghost Square serves as an inn that costs 5 GP a night, and it has an item shop that uses gil. When staying the night as part of the story, Cloud can date either Aeris, Tifa, Yuffie, or Barret here. Cloud's date picking him up on the date night is based on the date mechanics. Turtle's Paradise flier #3 is also found in the hotel.

The "haunted mansion" is situated atop a hill on a graveyard, where the gravestones lead to the other attractions of the resort. There is a skull on the floor, and bats flying in the distance. Pressing

at the same time causes a bat to fly at the player's screen.

The lobby has the shop on the left, and the reception to the right. The guest rooms are upstairs. Going to the reception allows the player to stay at the hotel with the same effect as any other inn in the game, but it costs 5 GP.

The ghosts playing chess here appear to be playing with pieces that are the summons from the game.

There is nothing to do here during regular visits, but during the storyline Cloud will take his date to watch a play. Since they are the 100th couple that night they are chosen to take part on the stage (unless it's with Barret, in which case the play is skipped). Depending upon the player's choices for Cloud's lines, the play can either go well or be ruined. There is no material reward effect either way.

The player can only go on the stage during the date event with Aeris, Tifa or Yuffie.

During date night, Cloud and his date share a moment on the gondola ride. Cloud can also ride the gondola at any other time with any other party member for the price of 10 GP.

Riding the gondola outside of the date sequence is the only way to view the FMVs that don't play during the date. If Cloud goes to the gondola with Cid, Cid will sleep the whole way through. Vincent will stand his back toward Cloud with one foot on the seat. Cait Sith is too big to fit on the seat and will stand facing toward the player. Red XIII will stand towards the window, wagging his tail. The location name for the gondola is called "Inside the Ferris Wheel" (観らん車内部, Kanransha naibu?), but this cannot be seen in a normal playthrough as the player cannot enter the menu in this area.

This is where the party meets Cait Sith, who joins the player's party. He poses as a fortune teller and foretells doom to something Cloud cherishes. The party can play various minigames at Wonder Square to win GP, and also exchange GP into items. Many of the minigames played during story sections are replayable here.

The elevator travels from Corel Prison up to the Chocobo Square. It is visited only once when Ester travels with the player after they are granted a chance to escape the prison by Coates.

Final Fantasy VII has a hidden affection value that determines whom Cloud will go on a date with in Gold Saucer later. The value is determined by the dialogue and party member choices made prior to the date.

The first character chosen to accompany Cloud through the amusement park gets a +3 boost. The party members not chosen will give a -2 decrease. Picking Red XIII does nothing.

When the party returns to talk to Dio about the Keystone, they stay the night during which either Aeris, Tifa, Yuffie or Barret—depending on who has the highest affection value—enters Cloud's hotel room and takes him out. If Cloud dates Aeris, Tifa or Yuffie, they will attend a play at the Event Square whose outcome depends on player choices. If Barret is Cloud's "date" this is skipped. Afterward the duo rides the gondola at the Round Square, before catching Cait Sith acting suspicious and give chase.

In the play, Princess Rosa (the date) is kidnapped by the Evil Dragon King Valvados. The hero Alfred (Cloud) is found by a Knight, who has him speak to the King. The King in turn tells Alfred to speak to someone who can help him, and a Wizard appears. The player can speak to either the Wizard or the Knight. If they speak to the Wizard, they can ask for Valvados's weakness, or "the Princess's measurements". If the player speaks to the Knight, they can ask for help defeating Valvados, or help defeating the King. Then, Valvados carries the date onto the stage, and demands Cloud name his enemy—the player can either name the Knight, the King, or Valvados.

If the player goes along with the play, Cloud kisses his date's hand and the power of their love defeats Valvados. If the player names the King as their enemy, the date becomes outraged and attacks Cloud and then the dragon. If Cloud kisses the dragon Valvados is revealed to be a princess afflicted by a curse, and the player can even choose to kiss the King. If Cloud picks the dragon princess or the King as Alfred's "true love" the date is left behind perplexed when everyone else pirouettes off the stage. If Cloud kisses his date, she blushes and they pirouette off the stage together.

The background music is simply called "Gold Saucer" (ゴールドソーサー, Gōrudo Sōsā?). "Cait Sith's Theme" plays on the Wonder Square when he is first met. The track "Racing Chocobos - Place Your Bets" plays on the Chocobo Square. The track "Hurry Up!" plays during battles on the Battle Square and the track "Debut" during the play at the Event Square.

The "Interrupted by Fireworks" plays during Cloud's date on the gondola ride, unless the "date" is Barret, in which case "Barret's Theme" plays instead.

The roller coaster and submarine minigames playable at Gold Saucer were a product of projects given to excess staff. Some of Square's senior staff had free time between projects, while new staff needed training; as such, Square gave them the minigames to give them projects that needed specialized programs.[1]

The unused text from the game suggests that the script for the date event would have been different. The text suggests the player would have been forced to pick the Chocobo and Speed Squares before going to the Event Square. In the earlier build, the date event was more free-roaming, allowing the player to choose which areas to visit, and less of a predetermined route of scenes.[2] 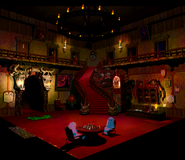 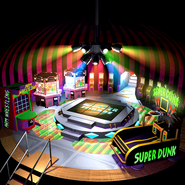 First room of the Wonder Square. 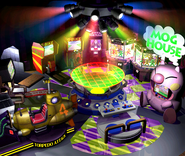 Second room of the Wonder Square. 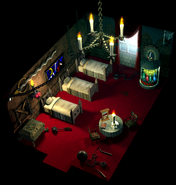