The Gold Knight, also known as the GoldKngt., is an enemy from Final Fantasy III. It is found in Goldor Manor. They are relatively powerful, but are among the weaker enemies found in the manor. Physical attacks work well enough in defeating them.

Three golden knights are seen attacking Prince Alus in the pub of Southwestern Saronia, believing him an imposter. Luckily the Warriors of Light arrive just in time to defeat the knights and make them flee. 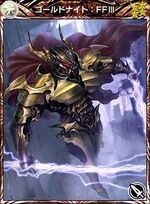 Retrieved from "https://finalfantasy.fandom.com/wiki/Gold_Knight?oldid=3246208"
Community content is available under CC-BY-SA unless otherwise noted.