Gold Hourglass (金の砂時計, Kin no Sunatokē?), also known as Hourglass, Auric Hourglass, Golden Hourglass and Hrglass3, is a recurring item or accessory in the series. It is the strongest of the Hourglass-type items, with its effects varying but oftentimes inflicting Stop for an extended amount of time. As an accessory, it protects the user from Stop.

Hourglass that casts Stop for a long period of time

Gold Hourglass inflicts Stop on all enemies. It can be dropped from Mindflayer.

Hourglass is an item that inflicts Stop to all enemies with an 80% chance. It can be dropped from Edgehead or morphed from Kimara Bug.

Damages all enemies and delays their next turn.

Gold Hourglass is a Use item that inflicts roughly 1000 non-elemental damage and Slow on all enemies, and delays all enemies' next turn. Thirty can be customized onto a weapon for Slowstrike, twenty on an armor for Slowproof, and either thirty can be used on an aeon to learn Delay Attack or eight can be used to learn Slowga. It can be stolen Fafnir and Nidhogg or bribed from Nidhogg and Mushussu.

Gold Hourglass is a priority 2 status-type attack item that delays the actions of all enemies. Consume 8 to teach Slowga to a creature. It sells for 37 gil. It can be stolen from Deep Haizhe (Oversoul).

Golden Hourglass is an accessory.

Gold Hourglass is not an item, but an enemy ability used by Asha which inflicts non-elemental damage and Slow to all allies.

The Auric Hourglass is an consumable item that turns back time. It can be obtained as a reward from certain missions and can only be used during free time in Akademeia to grant two extra days.

This section about an item in Final Fantasy Type-0 is empty or needs to be expanded. You can help the Final Fantasy Wiki by expanding it.

This section about an item in Final Fantasy Agito is empty or needs to be expanded. You can help the Final Fantasy Wiki by expanding it.

Gold Hourglass is an accessory that provides EX Mode Duration +20%. It can be obtained from the shop by trading 1,800 gil, Time Shard x3, Time Crystal x2, and Tome of the Orator x5.

A Gold Hourglass revives the player party instantly, without the player having to wait for the party to regenerate after having been wiped out in a battle. They can be bought in bulk as in-app purchases: 20 for $2.99.

An hourglass filled with glittering gold sand from the Celestial Realm. When raised to the sky, its contents burst forth, robbing the targets of its color and time.

Gold Hourglass is an item that has a 75% chance to inflict Stop to each member of a party. It can be bought for 500 pg. It can be found in Ancheim, Engine Room, Eternian Central Command, and Everlast Tower, and dropped by Chairman Profiteur (ch 5, 6, 7), Khamer](ch 5, 6, 7). 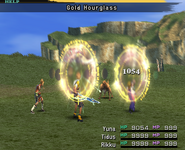 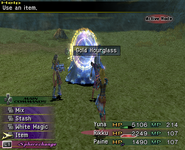