Once a kind and gentle soul, this mage's weaknesses in his heart lead to him being controlled by an evil being.

A figure clad in armor of deepest night who walks the path of darkness.

Golbez is a warrior of Chaos in Dissidia Final Fantasy and Dissidia 012. He comes to the cycle of wars as the antagonist representing Final Fantasy IV. He is a powerful spellcaster, and despite wearing a full suit of armor, remains agile. Golbez works behind the other villains' backs, attempting to assist the heroes while remaining their enemy. As Cecil's rival and older brother, Golbez considers himself stained with darkness beyond the point of salvation, and so walks the dark path he feels his brother should not.

Golbez's default outfit is based on Amano's original artwork of him

. He wears dark blue and black armor with gold details and a long cape. The shoulders of his armor are very large and spiked, and he has spikes along his gauntlets and legs. He wears a horned helmet with a thin visor. In his EX Mode, Golbez summons his Shadow Dragon which wraps around him and perches over his shoulder, and its body merges into his armor giving it swirls of black and purple along his body.

Golbez's first alternate outfit, "Cloak of Flame", is a composite of his 3D render

art. He wears black armor accented in silver and gold, with a cape bearing a crimson lining. During EX Mode, the Shadow Dragon is gold, which may refer to the Gold Dragon, a palette swap of the Shadow Dragon from Final Fantasy IV.

from Final Fantasy IV: The After Years. Golbez wears no armor and is clad only in a dark brown kilt and cape with beads around his wrists and one of his ankles. Although he has no armor in this outfit, Golbez's eyes remain in shadow, and he has long, white hair. In his EX Mode, the Shadow Dragon still coils around him but there is no head or claws, making its appearance more resemble tattoos or body art. 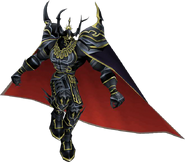 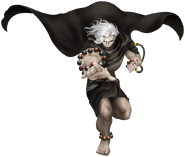 Enough. I am merely your shadow. I could not accept the darkness, yet I do not belong to the light.

Golbez's actions are a combination of his appearance in Final Fantasy IV and Final Fantasy IV: The After Years, but takes more from the latter. Golbez is still antagonistic and displays the dark side of Cecil, but is actually in control of his actions, displaying his more moderate and anti-hero-like personality. Although Golbez sides with the forces of Chaos, he trusts the warriors of Cosmos and often visits them to divulge certain matters. While he represents the dark side of Cecil, he is not evil in his intentions or actions.

Golbez's battle lines represent him as an anti-hero rather than an antagonist. He is portrayed as a warrior who seeks an honorable and fair battle, and looks forward to seeing the victor. He is confident in his own abilities, but when defeated, Golbez shows shame.

At the start of the 12th cycle, Golbez arrived to aid Cloud in fighting Lightning and the Warrior of Light. Golbez deduces that Cloud is concerned for his enemies because he knew one of the warriors of Cosmos. After the fight, Golbez comments how well Cloud fought so soon after his awaking before teleporting away. He later observes the warriors of Cosmos returning to Order's Sanctuary after she calls them back, and engages Yuna and Lightning, musing about the power of the warriors Cosmos is entrusting her hopes to.

When the manikins attack, Golbez visits Kain and divulges on the war's cycle of death and rebirth: for the revival to work, their memories of the last war and their original homeworlds are erased. He mentions Kain fell in the previous cycle, but still retains memories of their world, and that he will recover more with every successful battle. Their conversation is interrupted by Cecil, who doesn't remember his older brother, forcing Golbez to teleport away. Noticing how much interest Golbez has in Cosmos's warriors, The Emperor and Ultimecia begin to suspect Golbez is acting against them, but he evades their inquiry.

Golbez joins Exdeath in confronting the gathered warriors, revealing the manikins are heading towards Cosmos. While the others rush to her aid, Kain fights Exdeath as Golbez assists him by nullifying Exdeath's control over the manikins. Following Exdeath's defeat, Golbez expresses gratitude to Kain, as his actions have given him a chance to stop the cycle and save Cecil. Although he pleads with him to consider resting for the next cycle, Golbez accepts Kain's decision and promises the next cycle will be the last.

As the final cycle begins, Golbez appears before the revived Cosmos and refreshes her memory of her plan for her warriors to obtain their Crystals. Seeing how weakened Cosmos is, Golbez questions whether she is willing to risk her life for her warriors, and is impressed by her resolve to resign herself to her fate. Golbez also leaves a wild rose next to Firion as a means to help him regain his memories.

Golbez meets with Cosmos again, discussing her plan to end the cycle. Golbez warns Cosmos of her dangerous gamble, and if it fails, her warriors will not be revived during the next cycle, losing the war.

Golbez visits Cecil, who doubts his path. He tells Cecil he cannot find his Crystal simply by looking for it, and advises Cecil to follow him to learn more. The Emperor congratulates Golbez on baiting Cecil. Following Tidus's advice, Cecil leaves his comrades and follows Golbez to the Planet's Core. Golbez wishes to see if Cecil has the strength of will to find the Crystal, before Exdeath appears and accuses Golbez of treachery. Cecil defeats Exdeath to defend his brother, with Golbez congratulating him on proving himself worthy enough to find the Crystal. Cecil begs Golbez to join him, but he refuses and leaves, telling Cecil he cannot find the Crystal as he currently is.

Golbez and Sephiroth briefly meet at Kefka's Tower, where Sephiroth asks if he misses the light. Golbez says he has duties to attend to, while Sephiroth warns that he will be scorched by the light if he gets too close.

Cecil returns to his comrades when Golbez visits him again. Golbez attacks Cecil for depending on his friends for strength, stating his friendships are nothing but illusions. Golbez departs and is confronted by Jecht, who tells Golbez fighting a family member is not easy if he keeps their bond. Golbez implies to Jecht that his serving the Emperor will result in the latter eliminating him when Jecht no longer serves any use. Later, as Bartz is exploring the antagonists' territory, Golbez attempts to warn him that the fake Crystal he found was made by Exdeath before entering battle with him. An earthquake caused by the the Warrior of Light's radiance allows Bartz to flee. Exdeath mocks Golbez for guiding the heroes.

Cecil arrives at the Moon Canyon, telling Golbez he fights with friends to give them strength as they give him strength. After Cecil is victorious, claiming his Crystal, Golbez compliments Cecil's strength before vanishing.

After Cosmos's death, Golbez is confronted by the Emperor for treason. Golbez reveals everything he did was to assist the heroes in claiming their Crystals, believing they will defeat Chaos to free the worlds from the cycle. He confronts the Emperor for using both parties to create dark crystals to survive and take over what remained of existence. Garland tells Golbez his actions led to Cosmos's death, ending the cycle. Golbez questions Garland's role in maintaining the cycle, to which Garland says he has no desires or any right to have one as a prisoner of time.

Being a minion of Chaos, Golbez battles Cecil a second time, who claims that only in a world full of disorder can his wish can be fulfilled. Upon his defeat, he acknowledges Cecil and his friends can destroy Chaos. As he departs, Golbez claims he has no right to fight beside Cecil and that his ties to Chaos are proof of his weak heart. Cecil says Golbez will overcome himself someday, asking him to join him when the day comes. Golbez says Cecil is too kindhearted to be a knight, but contemplates the possibility of joining his brother if the light shines upon him and walks away.

Golbez is a Thaumaturge. His moveset consists of two-part attacks that can hit at both close and long-ranges and may have different effects depending on which part hits the opponent, and several of them can chain into HP attacks. This gives Golbez a lot of combo potential and versatility, able to cancel and chain his attacks together in different ways. However, his attacks are much easier to avoid at long ranges due to being telegraphed, and they hit over small areas that they can easily miss if the opponent's is not in the right position relative to Golbez. He also moves a bit slowly and has a very large hitbox, being one of the largest characters in the game.

In Dissidia 012 Final Fantasy, he is fought in Guidance of the Moon, A Treasure Hunt, and Conclusion of the Cycle chapters of Story Mode.

See also: Gameplay changes between Dissidia and Dissidia 012 for Golbez 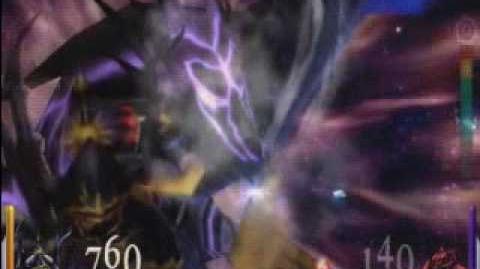 Golbez's EX Mode is Summon Shadow Dragon, where he summons and fuses with his Shadow Dragon from Final Fantasy IV. Golbez gains the special attack "Black Fang" by holding

. It has a long charge time, which makes him vulnerable to attacks, but instantly Breaks the opponent if successful. The summon Phoenix is the only way to stop this; summons such as Alexander that freeze the opponent's Bravery will instantly cease their effects when Black Fang strikes, and the effects of Demon Wall and Mandragora will persist but will not block Black Fang. Black Fang will succeed even if Golbez is afflicted with Break when it executes.

Golbez's EX Burst is Twin Moon. The player must input three chains of commands within a time limit. If the player fails, Golbez crushes the opponent between four boulders. If all three commands are input successfully, the Shadow Dragon paralyzes the opponent with Binding Cold, followed by Golbez casting Twin Meteor, conjuring a barrage of meteorites to attack. 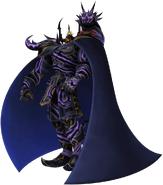 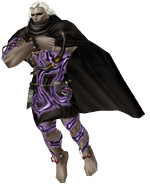 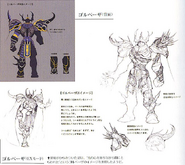 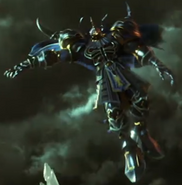 Golbez in the Dissidia 012 opening.

Golbez's Genesis Rock attack alludes to the wikipedia:Genesis Rock, a sample of the original lunar crust recovered by Apollo 15.

Golbez's fighting style is "Thaumaturge". [view · edit · purge]Thaumaturgy (Greek words θαῦμα thaûma, meaning "miracle" or "marvel" and ἔργον érgon, meaning "work") is the capability of a saint to work miracles. It is sometimes translated into English as wonderworking. A practitioner of thaumaturgy is a thaumaturge, thaumaturgist or miracle-worker.