Golbez appears as a non-elemental summon.

Three versions of Golbez's Signet are available, Golbez, Golbez RE, and Golbez OR. All Golbez Signets share the special attack, Black Fang, which deals non-elemental damage to all enemies and inflict instant death.

Some of the Signets of Golbez are based on a specific design of Golbez from throughout the Final Fantasy IV series. The Golbez RE Signets uses his 3D models from the 3D versions and the Golbez OR Signet uses his battle sprite from the original SNES version of Final Fantasy IV.

Golbez is also fought as a boss.

Golbez allows the user to use the following abilities: 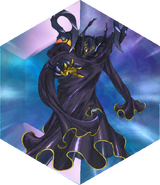 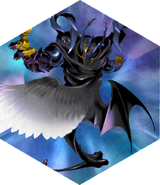 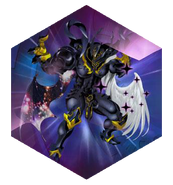 Golbez RE allows the user to use the following abilities:

Depending on which type of Golbez OR Signet the player possess, Golbez OR allows the user to use the following abilities: 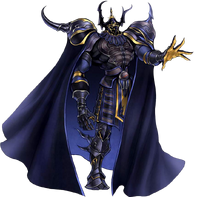 Golbez is a Warrior of Chaos and stands as the antagonist representing Final Fantasy IV, opposing Cecil Harvey.

Possessing motivations and desires more complex than most of the other antagonists, Golbez helps the heroes in their struggles in his secretive fashion while pretending to follow the plan set down by the Emperor. In his heart, Golbez is on the side of light, and works to assist the heroes in the hopes they break the cycle of war.

His alternate outfit is a palette swap based on his Final Fantasy IV battle sprites and 3D render, giving him black armor and a red lining on his cape.

Golbez plays a brief but important role in the main story, enlightening Kain to the nature of the cycle of war, information which motivates Kain to strike down his allies so they will survive to the next cycle instead of being killed permanently by the manikins. He speaks to Cosmos at the beginning of the thirteenth cycle before the war begins, rekindling her memories of the previous cycle when she laid the foundation for her plan to manifest Crystals for her warriors.

Golbez's second alternate outfit is his appearance in The After Years as the Man in Black, removing his armor and leaving him clad in a black kilt and cloak. 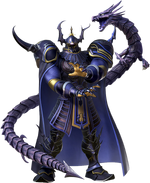 Golbez is summoned as a warrior of Spiritus and gathers with the other antagonists at Spiritus's dome. When Spiritus communicates with Materia, Golbez silently watches as Spiritus declares his intentions to rule World B. Since this incident, Golbez has a minor role in the conflict.

Golbez is a Marksman-type, starting the match with his shadow dragon, which boosts his attack potency. The dragon disappears if Golbez takes more than 1,000 HP damage. His EX Skill is Binding Cold/Shadow Dragon that conjures a chill storm that temporarily freezes any enemies who touch it. If the shadow dragon is not present, it will be summoned instead.

Golbez briefly appears in the Event Music Sequence "Theme of Love" which shows his boss battles from the original Final Fantasy IV. 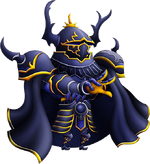 Drunk on power, Golbez has forgotten about the light. Reflected in his dark eyes are the figures of Cecil and the others, who fight for peace. What unfathomable grief will arise when two who share the same blood fight? 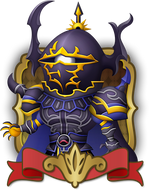 Golbez is a boss-type enemy, and makes his playable Theatrhythm debut as the representative antagonist of Final Fantasy IV, obtained by collecting Dark Crystal Shards.

Golbez is a playable character and as a boss. 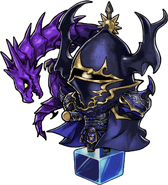 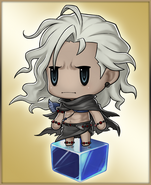 Golbez is a summonable Legend. 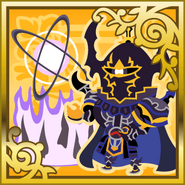 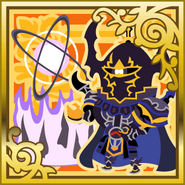 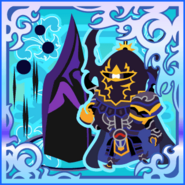 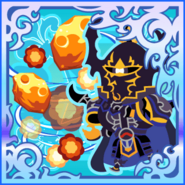 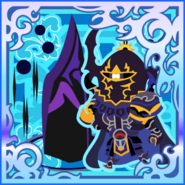 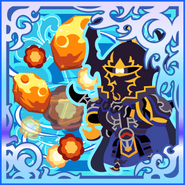 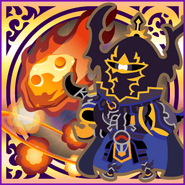 Golbez is a boss.

Golbez is an enemy and could be recruited to the party during the Challenge Event Man in Black as the First Time Reward for completing the event's Dwarven Castle in Part 1.

I was once consumed by evil myself. There is nothing I can say now to defend myself. Let me repay my debts in sweat and blood.

Golbez appears as a character and summonable vision. His job is listed as Mage.

Golbez's stats at his highest levels are as follows (with no passive abilities taken into account), along with the maximum amount of stat points that can be increased through pot-enhancements: 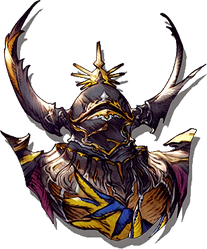 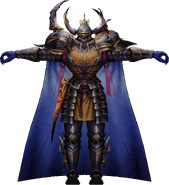 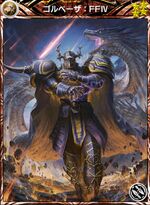 Referring to his control over the Archfiends, Golbez's Dissidia card has the effect that when moved to the Break Zone, the player can search their four cards of different elements and a cost of 2, and play them to the field for no cost, while his 3D render card lowers the cost to play it by 2 for each of the Archfiends the player controls, and allows the player to move an Archfiend they control to the Break Zone to Break a Forward of their choosing. His Amano art card references his control of Kain, allowing the player to select a Forward on the field and take control of it after Golbez attacks, if they control a Dark character. His Man in Black cards allude to his hidden identity, preventing them from being played while a Golbez card is in play, and the two each have an ability that mirror Golbez's Pressure and Taunt abilities, the former preventing a Forward from attacking and the latter redirecting damage to the player's Forwards to Golbez instead. 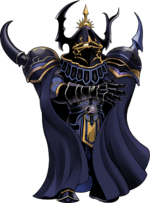 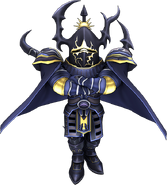 In Lord of Vermilion II, Golbez appears as a card and summonable creature in the sequel to Lord of Vermilion, along with other characters from Final Fantasy IV as part of a special cross promotion. His Shadow Dragon is also a card. 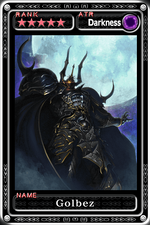 This evil mage wears armor black as pitch, and commands the Elemental Archfiends in his bid to claim the Crystals.

Golbez, along with Cagnazzo, Rubicante, Barbariccia and Scarmiglione are all promotional cards (the latter four being promotional for the release of Final Fantasy IV for the Apple iPad). Golbez himself was part of the "Grab-A-Golbez" campaign. All of them are Rank 5 (the rarest), with Golbez being a Giant-type Guardian that would have been found in the Deadmoon Desert.

Golbez and Awoken Golbez are units and their ability is Binding Cold. Golbez can be promoted to Awoken Golbez. 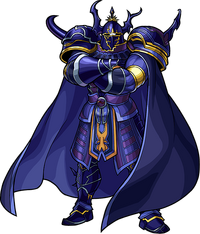 Golbez appears as part of the 2018 Final Fantasy collaboration. 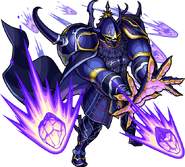 Golbez appears in the Dissidia Final Fantasy event as a Rank SS Yo-kai of the Shady Tribe.