A great monk once blessed this pole with powerful charms for destroying evil.

Gokuu Pole (ゴクウの棒, Gokū no Bō?), also known as Simian Staff and Ruyi Bang, is a recurring weapon in the Final Fantasy series. It is oftentimes a mid-ranked pole that provides excellent attack power.

The Gokuu Pole is a mid-ranked pole that provides +63 Attack and 12% combo rate. Poles' attack speed is average at 2.47s charge and 1.2s action time. It can be bought for 9,000 gil at Phon Coast and Archades, and requires the Poles 3 license for 30 LP.

In the Zodiac versions, it provides 72 Attack, 30 Evade, 25 CT, 15% combo rate and requires the Poles 4 license for 40 LP. It can be bought in Mosphoran Highwaste and Phon Coast for 10,360 gil, found as a treasure in the Salikawood (Trunkwall Road) and Tchita Uplands (The Skytrail), or stolen from Wendigo (3% chance).

Goku's pole is a weapon for Lancer and Dragoon, thus making it classified as a spear.

Sun Goku himself appears as the last boss of the Swallow's Compass under the name Qitian Dasheng. He wields his iconic pole as his weapon.

One strike from this pole can cause the target to lose his faith.

The Gokuu Pole is a mid-ranked pole that provides +10 Attack, 20% Weapon Defense, and can inflict Atheist when attacking with it. It can be bought for 7,500 gil at an Outfitter on Chapter 3 onwards, won from the battle at Orbonne Monastery, or found as a rare treasure at Free City of Bervenia.

The Gokuu Pole is a mid-ranked pole that provides +44 Attack, +2 Defense, +2 Evasion, and +2 Speed. It can be used by the Master Monk, Geomancer, Chocobo Knight, Dancer, and Heritor, and teaches the abilities Artifice's Embrace for 200 AP to the Geomancer and Withering Strike for 400 AP to the Master Monk. It can be obtained from the Bazaar through the Uncommon Poles C category.

A quarterstaff fashioned to resemble a legendary weapon said to have been used by the Monkey King. It does not lengthen and contract at will as told of in legends, but it is an unexpectedly effective weapon. [Effect when equipped: +Modifier when attacking multiple targets]

In Bravely Default, Simian Staff provides 11 P.ATK, 90 Aim, and deals 2x damage against multiple enemies. It can be bought as part of Norende Village reconstruction from the Adventurer for 300 pg. 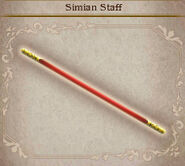 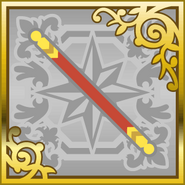 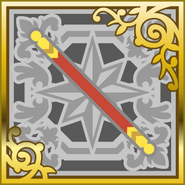 [view · edit · purge]The Gokuu Pole originates from the weapon of the trickster hero Sun Wukong (そん ごくう (Son Gokū?) in Japanese) from the popular Chinese classic tale, Journey to the West. A pole known as the Ruyi Jingu Bang (如意金箍棒, Cintamani Golden-bound Cudgel?), it was originally the Dragon King Au Guang's keepsake and remained as a pillar held in his underwater palace on the ocean floor, once used by the Yu the Great in his pursuit and studies of flood control.

Weighing 18,000 pounds, or nearly 8.5 metric tons, capable of changing its size, obedient of its master's command, and capable of splitting into many, the pole was considered ultimately worthless and impossibly unwieldy, and remained so until Sun Wukong changed its size at his command.

Its ability to bestow the Atheist status is a reference to Journey to the West's themes and Sun Wukong's traits of defiance and rebelliousness against the heavenly kingdoms upon their discrimination and snobbery.