Gohn Meteorite, also called Gohn Meteor, is a location in Bartz's world of Final Fantasy V. It is located in the desert near the Ronka Ruins, and is one of four meteorites used to travel to the world.

Krile Mayer Baldesion used the meteorite to travel from Galuf's world to help protect the crystals in Bartz's world. It landed near the former location of Gohn, near the desert where the Ronka Ruins crashed. After traveling by meteorite, Krile came to the aid of her grandfater, Galuf Halm Baldesion, and his companions, Bartz Klauser and others, to try to stop Exdeath's return.

After Exdeath returned and traveled to Galuf's world, Galuf and Krile used the meteorite to return to their world. He did not permit Bartz and the others to come, as this was the last meteorite, and there would not be a way for them to return to their world if they followed. Nonetheless, Lenna Charlotte Tycoon and Faris Scherwiz agreed they had to follow Galuf to help him, which Bartz supported.[1]

With the help of Cid and Mid Previa, the party revisited the meteorites together to recharge them with adamantite. However, when the party checked up on Mid and Cid, a Manticore attacked them, which they defeated.

The Gohn Meteorite is only visited once, in the quest to obtain adamantite for the meteorite. The quest begins after first speaking to Cid and Mid at the Tycoon Meteorite, any time after Ronka Ruins is complete. At the Gohn Meteorite, the party meets Cid and Mid outside, and after Cid and Mid do not return for a bit, must check on them. Inside, Bartz, Lenna, and Faris fight a Manticore. Against this boss, Time Magic spells such as Slow and Stop can be very effective, along with some Blue Magic spells such as Death Claw.

"Four Hearts" plays outside the meteorite while "Dungeon" plays inside. 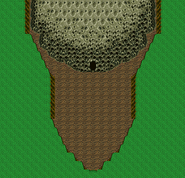 In the pre-GBA versions, they were known as meteors. [view · edit · purge]A meteor or "shooting star" is the visible streak of light from a meteoroid or micrometeoroid, heated and glowing from entering the Earth's atmosphere, as it sheds glowing material in its wake. Meteors rarely explode in the Earth's atmosphere. The term has become associated with quickness with the adjective "meteoric". In the context of myth and superstition, meteors and comets sighted in Ancient and Medieval Europe were once held as ill omen, said to be the message of the heavens' displeasure of man's affairs to herald grave catastrophes.

Seeing that meteor refers to a piece that does not withstand atmospheric entry, the meteors were renamed meteorites in the GBA and subsequent versions of Final Fantasy V.