Gohn, labeled Gohn, the Town of Ruin on entry, is a location in Bartz's world in Final Fantasy V. It is a set of uninhabited, overgrown ruins located on top of the buried Ronka Ruins (where the earth crystal is held) and the Catapult (an abandoned subterranean airship hangar facility) located in a valley beyond the Desert of Shifting Sands.

In the merged world, the desert where Gohn used to be becomes a single tile on the world map and it can only be accessed by airship.

Gohn's history is unknown, but it presumably belonged to the Ronkan civilization, which collapsed 500 years prior to the events of Final Fantasy V.[1]

King Alexander Highwind Tycoon, while possessed by Exdeath,[2] traveled to Gohn, floating across the Desert of Shifting Sands.[3] Bartz Klauser's party traveled to Gohn in search of him and chased him around the ruined town, and his daughters Lenna Charlotte Tycoon and Faris Scherwiz called out to him. As they did, they fell into the Catapult, and King Tycoon reactivated the ruins, raising them from beneath the surface, destroying Gohn and turning the surrounding area into a desert.[4]

Later, Krile Mayer Baldesion's meteorite landed near the former location of Gohn, and the Ronka Ruins crashed into the desert where Gohn used to be located.

Gohn is located on the southeast area of the western continent, surrounded by mountains on all side with a valley between them to reach it. It is east of Jachol, and to its north is the Desert of Shifting Sands and the Library of the Ancients. The town is directly above the Catapult and Ronka Ruins.

The town comprises overgrown ruined stone buildings, with some destroyed pillars. Though built above the Ronka Ruins, they do not resemble the Ronka Ruins' technological constructs, but do somewhat resemble the stone pillars and walls seen in its battle background. The central building of the ruins is located above a rock plateau.

Gohn is only visited once to find King Tycoon. After following him through the ruins and eventually to a building in the middle of the ruins, the party then is taken to Catapult, where the next quest takes place.

"Cursed Earth" (呪いの地, Noroi no Chi?) plays as the background theme to Gohn.

The ruins of Gohn (GBA).

Gohn on the World Map (GBA). 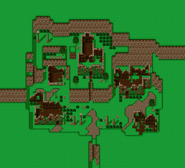 "Gohn" may be a play on the English word "gone", which may be interpreted as "a thing of past", fitting for the location.