A man shrouded in strange clothing... Or perhaps a woman? Perhaps not even human at all...

Gogo is a playable character in Final Fantasy VI. They are a secret character found in the World of Ruin. A skilled Mime, Gogo is able to mimic the actions of the other party members.

While exploring the Triangle Island, the Returners were swallowed by a large worm called a Zone Eater. They awoke in the Zone Eater's Belly, a large underground cave system. In the back of the cave they found Gogo, who offered to mimic them but first asked what they were doing. The party explained their quest to defeat Kefka and save the world, and Gogo decided to join them and mimic them saving the world.

As the party fled Kefka's Tower after Kefka's death, a path collapsed and Setzer and Edgar were trapped while Gogo and Celes were thrown forward to parallel sides of the room. Celes tried to move a part of the floor to free them but the switches had to be operated simultaneously. Gogo mimicked Celes perfectly and pressed the switches to free Edgar and Setzer. However, as Celes followed them, Gogo mimicked her and walked over a pit, causing them to fall. Gogo was able to escape to the Falcon and got out of the tower with the rest of the party.

In their concept art and future remastered version sprites, Gogo wears elaborate multicolored layered robes with various patterns. Alluding to their status as a Mime, Gogo's clothes seem designed to resemble the attire of other members of the Final Fantasy VI cast; the white and black triangle trim on the bottom is similar to Setzer's coat, the spikes echo the ones Shadow has on his outfit, and the sun-like polka-dots resemble the ones worn by Gau and Strago. Gogo's face is covered by a yellow hood with feathers and horns emerging from it. A slit in the hood reveals their eyes and some of their face, which in some appearances has white and red paint similar to Gilgamesh. In their Super NES and GBA sprite, Gogo was depicted with red and green robes with gold trim.

Gogo's gender is unclear. Both the Japanese and English scripts describe Gogo's gender as difficult to tell, but in the Japanese version Gogo uses the masculine pronoun ore, and speaks in an all-round masculine speech register. Unused shop price modifiers that change prices depending on the gender of the party leader treat Gogo as male.

Gogo's Tent sprite in the 2014 mobile and Steam versions resembles a circus tent.

Gogo speaks only a few lines of dialogue when met. Gogo dislikes how long they have been idle without mimicking anyone. When the party explains they are seeking to save the world, Gogo is surprised, yet declares almost dismissively that if that is the party's purpose, they shall mimic them and save the world too. They then join the party, instructing them to lead on so that Gogo may mimic them.

As a Mime, Gogo emulates the actions of others. In battle they can copy most special abilities and attacks the party uses, and can equip their special abilities as well, with the exception of Trance. Out of battle Gogo's mimicry skills allow them to perfectly copy and mirror Celes's movements, right down to blinking in unison.

Gogo is a Mime whose Mimic ability repeats the last action. Gogo can equip three abilities from any other party member via the menu. To balance their versatility, Gogo's stats are subpar, and their equipment is limited to rods, some daggers, maces, universal shields, and lightweight caps and robes. Gogo's Desperation Attack is Punishing Meteor that deals magical damage to a single target.

"Gogo" plays inside the Zone Eater, and is mixed into the ending.

Gogo has made few playable appearances in spin-off titles within the Final Fantasy series.

Gogo's abilities and role vary in spin-off titles, but the character is often associated with physical and magic attacks in combat. Final Fantasy Record Keeper gives Gogo Soul Breaks that buff the party and allow them to mimic abilities used by allies. In Final Fantasy Airborne Brigade they had abilities from Strago's Lores command, with some attacks from Gau's Rage.

Due to the original game leaving their gender a mystery, some titles refer to Gogo as "him" or register the character in both the male and female unit categories.

They have appeared in the following games:

The character Golden Goliath appears in Final Fantasy XIV as part of the Blue Mage job storyline. He is a Roegadyn from the far eastern town of Namai, going under the name of Gogo when fought in the 31st stage of the Masked Carnivale, even wearing an attire reminiscent of their counterpart from Final Fantasy VI.

The Dreamscape has a bug that will change Gogo's palette into pink.

According to Director Yoshinori Kitase, Gogo does not have a secret identity nor a backstory, and only exists for the player to select for use in battle.[3] As possible candidates for Gogo's identity, fan theories have put forth Darill, Baram, Emperor Gestahl, Banon, and other characters who do not have their fates confirmed beyond doubt.

Gogo seems to be a reference to the Famed Mimic Gogo from Final Fantasy V. The manner in which Gogo equips other abilities works the same as the Mime job did in Final Fantasy V, and the name of Gogo's Desperation Attack, Punishing Meteor, could refer to the Famed Mimic Gogo "punishing" the party for not mimicking him properly by casting Meteor on them when his HP gets low. The two also bear the same name and have a similar appearance. The Famed Mimic Gogo casts Banish on himself when the party mimics him properly. The spell casts the target into the Interdimensional Rift, and it is implied by other games that beings are able to use the Rift to move between different Final Fantasy worlds, so it is plausible that the two Gogos are the same being, but this has not been proven or disproven.

It was originally intended for Gogo to be found in any pub in the World of Ruin disguised as one of the player characters not in the player's active party. Gogo would randomly cycle between the towns based on a timer, and if the player managed to speak to them with the real character they were disguised as, Gogo would reveal themself and join the party. The developers felt the quest was too difficult and changed this for the final version of the game.[4][5] This could suggest that the Siegfried imposter was meant to be Gogo during development.

Gogo has a placement on the Blackjack, but it can only be seen by hacking Gogo into the party or using the airship glitch. They use the same line as the one when they are inside the Falcon.

An urban legend was that Gogo was a reference to the American politician Adlai Stevenson. The theory claimed that Gogo, and the Zone Eater's Belly where Gogo is found, allude to things Stevenson said or wrote, such as a passage in one of his books where he compared legislating to "jumping from one rickety bridge to another, with blind men running back and forth trying to push you off", which is what players must do in a room in the Zone Eater's Belly. The theory has been traced back to a Final Fantasy fan forum and a poster that started the rumor in 2001 as a joke, and all of the quotations the theory attributes to Stevenson are made up.[6] 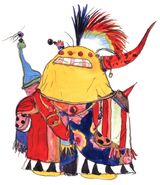