You truly are a fool! What is the life of one girl, when weighed against the greater good?

Gaffgarion is a middle-aged man donning a suit of tightly-pacted armor, obscuring all parts of his body except for the face, exposing his white moustache. He wears leather boots, and his armor has a patch of white fur around the shoulder area.

As a false executioner he sports identical attire, only with a hooded robe cloaking most of his body.

Gaffgarion is the definition of a mercenary: willing to commit to any act, save the price be high enough. He served the Order of the Eastern Sky during the Fifty Years' War, but was discharged due to the barbaric methods he employed. Brash and ruthless, he won't hesitate to slaughter those who oppose him. He does show a degree of mercy, as he presents Ramza an opportunity to join him and Dycedarg during their second encounter.

Gaffgarion is allied with the Order of the Northern Sky, and explains to Ramza how he believes in Dycedarg's ideals, and that he is ultimately fighting for the greater good. It is unknown if he legitimately believes that, or if he is merely acting on accordance to what the Order paid him for.

Gaffgarion was a Division commander of the Order of the Eastern Sky but was expelled for the barbarism he employed to ensure victory at the end of the Fifty Years' War.

Gaffgarion is hired by Dycedarg Beoulve to discard Princess Ovelia, who is in the way of Duke Larg's ascension to Regent of Ivalice in the name of Prince Orinus, whom he plans to have coronated. Gaffgarion accepts a mission from Agrias Oaks, the princess's bodyguard, to protect Ovelia to get close enough to do his job. He travels to Orbonne Monastery with his team, including Ramza Beoulve, Dycedarg's younger brother who knows nothing of the plot. The monastery is attacked by several Order of the Northern Sky knights dressed as Order of the Southern Sky knights, and following the plan, Gaffgarion stages a counterattack on them. During the attack Delita Heiral slips in a back door and kidnaps the princess.

Gaffgarion and Agrias lead a pursuit team after Delita but are attacked by a group of mercenaries hired by Folmarv Tengille. With the combined swordsmanship skills of Agrias and Gaffgarion the team wins and catches up to Delita at Zeirchele Falls, where he has encountered a group of Northern Sky knights. Gaffgarion reveals his true mission and attempts to kill Ovelia, but Delita is fighting on the side of the Southern Sky and takes action to protect her. Ramza remains loyal to Ovelia and Agrias, and counterattacks Gaffgarion, forcing him to retreat as Delita dispatches the Northern Sky.

Dycedarg is unwilling to give up. He has secretly entered into an agreement with Cardinal Delacroix to get Ovelia, and sends Gaffgarion to help Delacroix. At Delacroix's stronghold of Lionel Castle, Gaffgarion discovers Ovelia has been captured, but that Delacroix wants a Zodiac Stone that has fallen into Ramza's possession. After fellow accomplice Ludovich Baert fails to retrieve it, Delacroix kills him and arranges for Gaffgarion to create a trap: He will pretend to execute an Ovelia decoy to lure Ramza to Golgollada Gallows and several Lionel guards will join him in an ambush.

The plot is carried out and the trap is sprung, but despite being outnumbered, Ramza, Agrias, and Mustadio Bunansa, the original keeper of the Taurus Stone, fight back and defeat the Lionel guards. Gaffgarion retreats to Lionel to ready a second ambush. As Ramza's forces arrive he scales the wall to open the gate for his men. Gaffgarion appears and gives the signal: several Lionel guards, including a summoner, emerge from hiding to attack Ramza's men, while Gaffgarion challenges Ramza to a duel. Ramza prevails and kills Gaffgarion.

Gaffgarion is a Fell Knight and uses the Shadowblade and Duskblade techniques. Shadowblade attacks a unit with red flames and drains the unit's HP, giving the HP to Gaffgarion. Duskblade is similar to Shadowblade, but instead of draining HP it drains MP. When Gaffgarion joins as a temporary playable character at the start of chapter 2, he joins at level 10 with 61 Bravery, 67 Faith, and equipped with the Mythril Sword, Golden Shield, Close Helmet, Plate Mail, and Power Gauntlet.

Gaffgarion is fought three times in the story; first at Zeirchele Falls, followed by the battle at the Golgollada Gallows, and the final battle with him at Lionel Castle. When fought at Zeirchele Falls, he uses whatever abilities and equipment he is currently equipped with. Before this part the player can thus remove his equipment and make him useless as a boss. One particularly amusing choice is to change his Job Class to a Priest with no equipment; his HP becomes so low due to this that he can get KO'd in one hit.

It is also possible to train Gaffgarion to become a Ninja in the two story battles he takes part in. This allows players to have an enemy Ninja as early as in Chapter 2 by abusing the spillover JP earning mechanics (the earliest battle against Ninja is in Walled City of Yardrow in chapter 3). By manipulating Gaffgarion's level, the player can catch as many weapons that Gaffgarion throws as possible.

During the battle at Golgollada Gallows, he is level 17 with 61 Bravery, 67 Faith, and equipped with the Blood Sword, Mythril Shield, Close Helmet, and other random equipment. During this fight, he is immune to the Berserk, Charm, and Stone statuses. He generally has the Counter ability in this fight, as well as other random abilities.

In the final battle with him at Lionel Castle, Gaffgarion is level 18 and equipped with an Ancient Sword and Golden Shield. He comes with no secondary ability and is immune to Berserk, Charm, and Stone.

When fought in the fourteenth Rendezvous battle: Brave Story, he is level 99 and starts with 65 Bravery and 52 Faith. He is equipped with the Defender, Reflect Ring, and his other equipment is randomized. He has access to the Fell Sword and Bardsong commands, as well as to the abilities Counter, Defense Boost, a random movement ability. He is immune to the same statuses as previously.

Gaffgarion has appeared in the following games throughout the Final Fantasy series:

One can assay the executioner at Golgollada Gallows is Gaffgarion before he takes off the cape and the hood as both his mustache and the mouth guard can be seen on the executioner's face picture.

Gaffgarion's character description in the chronicle says nothing about his scheming with Dycedarg and Delacroix. 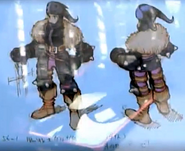