Godo Kisaragi is a character in the Compilation of Final Fantasy VII. He is the father of Yuffie Kisaragi and the leader of the nation of Wutai.

Godo is a middle-aged man wearing a sleeveless blue kimono with black trim, held closed by a white sash. Under the kimono Godo wears sandals and a white robe with longer sleeves. He has long black hair, a long mustache, and a short beard. When fought as a boss, Godo transforms into a large humanoid creature with a three-faced head, red, yellow and black robes over green skin, and wielding a large sword.

In his youth, Godo is implied to have been a fierce warrior and an independent king, standing up against the Shinra Electric Power Company to defend Wutai's honor and culture. By the time of Final Fantasy VII however, he is thought by Yuffie to be a shell of his former self who spends the day sleeping and has let Wutai become a tourist resort. After she defeats him in battle, Godo tells Yuffie that the war made him realize that in using their power to fight, Wutai was no different from Shinra, and now realizes from Yuffie that to make a true difference, one needs not just strength, but determination. In the same scene, Godo shows he has the same obsession Yuffie has with Materia, though not as prominent.

When the Shinra Electric Power Company began to expand to further reaches of the world, they aimed for the island of Wutai as a site of a mako reactor. Godo refused and this sparked the Wutai War. Though Shinra won the war, they backed out of building a reactor at Wutai. The nation was turned into a tourist attraction as a result.

When the party pursues Yuffie to Wutai when she steals their Materia and speaks to Godo about her, Godo denies knowing who she is and asks to be left out of the party's business with her, not wanting to anger Shinra by associating with their enemies. Yuffie yells at him for acting cowardly about Shinra, and Godo insists she doesn't know what she's talking about.

Later, when Yuffie climbs the Wutai Pagoda to fight the Five Gods of Wutai, she finds Godo is the leader, and engages him in a one-on-one fight. Defeating him and proving her strength, Godo tells her why he no longer wishes to oppose Shinra, and rewards her with her level 4 Limit Break as well as the Leviathan Materia. Yuffie departs, Godo telling her that once the party's quest is over, to attempt to return to Wutai with their Materia, as they'll have no further use of it.

While Godo does not make a physical appearance, he is mentioned a few times in "Episode INTERmission", by his daughter, Yuffie, and his pupil, Sonon Kusakabe. Godo has been imprisoned after the Wutai War's cease fire, although details of his arresting are not disclosed. Since then, a new government took over the reins of his country.

Godo is fought as a boss as the last of the five fighters in the Wutai Pagoda. Since he is the last fighter, Godo is the most powerful and most difficult to defeat. Like all of the fighters, Yuffie must fight Godo alone. He uses Trine, causing moderate lightning damage, which can be learned if Yuffie equips an Enemy Skill Materia. 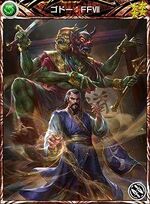 All the bosses in the Wutai Pagoda appear to have a link to theater. Godo's name could be based on Godot, the title character from Samuel Beckett's famous play Waiting for Godot.

[view · edit · purge]Kisaragi (如月) is the Japanese name for the month of February.