A bell that can break the seal barring entry to Kashuan Keep.

The Goddess's Bell (めがみのベル, Megami no Beru?) is a key item from Final Fantasy II. An ancient key, it is sealed deep in the Snow Cavern.

After the Kashuan Keep was built, the King of Kashuan worried that people would try and steal it. So he built a door and three keys. Unless one was a member of the Kashuan royal family, it was impossible to open the door without a key.

Eventually, Firion and the party come to retrieve the bell so that they may enter the Keep, since Gordon had gone missing. The Empire of Palamecia is also searching for the bell and dispatches Borghen to retrieve it. This is implied to be a suicide mission as Borghen mentions he'll be executed were he to return empty handed. 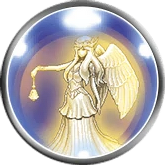 [view · edit · purge]A goddess is a female deity with supernatural powers in polytheistic religions. Goddesses most often have female characteristics that are apotheosized in their pure form, and some cases they have rather general for all humans characteristics, both men and women, like Sophia, and other times they can have characteristics that are rather not specific for women like battle and hunting success (Artemis). Thus while they have been, are and may be associated with as wide a range of phenomena as male deities, including war, creation and sometimes destruction (and death), life-giving, healing and compassion, they have been especially associated with beauty, love, motherhood and in prehistoric religions and also later with the Earth, fertility (Mother-goddess cult in prehistoric times).