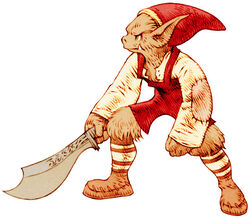 A diminutive species of goblin with large ears and an upturned nose. Surprisingly strong for its small size.

Goblins are a diminutive species of monster in Final Fantasy Tactics. Among the first monsters battled in the game, they fit the classic Goblin niche of also being some of the weakest. They have an elemental weakness to Ice.

Regular red-capped Goblins are fought in many of the Chapter 1 locations and are quite weak, having a low movement range.

The black-clothed variants of Goblins pack a bit more punch and HP. They also know the Turn Punch skill.

The Gobbledygook race has the best HP and skills of any other Goblin, but that still isn't saying much.

The damage formula for Tackle is as follows:

The damage formula for Spin Punch is as follows:

The formula for success rate of status attacks are as follows:

[view · edit · purge]A goblin is a small, mischievous creature found in many European folk tales and legends. The word "goblin" comes from the Norman French word Gobelinus, the name of a ghost that haunted the town of Évreux in the 12th century.

[view · edit · purge]Gobbledygook is jargon or especially convoluted language that results in it being excessively hard to understand or even incomprehensible.