The Goblin is a fire-elemental Eidolon from Final Fantasy Dimensions II. It can be obtained as a signet for Morrow to equip as a first-time completion reward for the "Ramuh's Task 2" side quest at Eidola's Great Lakeside.

The signet teaches Morrow the Break Attack ability, an attack that has some usefulness to lower the damage inflicted by bosses. However, aside from its usefulness in the opening chapters of the game, the Goblin signet is considerably weak.

The Goblin's summon attack is Goblin Rush, which deals small fire-elemental damage to all enemies. Summoning the Goblin costs 1 bar from the Summon Gauge.

The following are the abilities Morrow can learn from the Goblin: 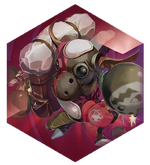 Similar to other basic summons, both versions of the Goblin could only be obtained as possible treasure results when completing a battlefield in Eidola Temple or the Present Ifritia Mine. 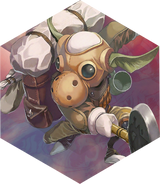 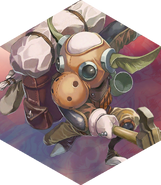 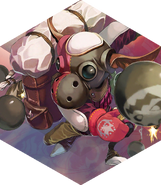 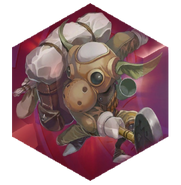 [view · edit · purge]A goblin is a small, mischievous creature found in many European folk tales and legends. The word "goblin" comes from the Norman French word Gobelinus, the name of a ghost that haunted the town of Évreux in the 12th century.