Miho Hino
Gnash is a Selkie boy from Final Fantasy Crystal Chronicles: Ring of Fates, who usually speaks with broken English. He often talks about eating things, and he confirmed Al was a good guy by testing if he was edible. Like other Selkies, Gnash is quick, agile, and dressed in animal hide. His keen senses are beneficial to his companions, as are his skills with a bow. Gnash can double-jump, letting him reach places his allies cannot.

Gnash grew up in a Selkie village that was once in the Abyssus Forest, but everyone in the village died from an illness. Gnash is the only one who survives and lives alone in the Abyssus Forest. He is orally primitive, speaking only basic words. He learns to speak with the animals in the forest, making him the only party member who can speak to the dogs and cats in the town of Rebena Te Ra.

When Yuri, Chelinka, and Alhanalem venture into the Abyssus Forest, they find Gnash fighting with a Mandrake. The Mandrake poisons Gnash, so Yuri and Al come to his aid and defeat the Mandrake. Al heals Gnash and Gnash thanks the group for helping him out by joining the party and helping in return.

When Gnash meets Meeth in Rela Cyel, the two appear to understand each other on a deep level by looking at each other's facial expressions.

After defeating Galdes, Yuri and Chelinka can see Gnash in Rebena Te Ra, talking with a dog showing a friendly attitude to Yuri and Chelinka as if he never met them. He declares Yuri his friend and a good guy.

If the player goes to Villa in multiplayer mode, Yuri and Chelinka mention Gnash and how no one else seems to have noticed him.

Gnash has the ability to talk to animals. He probably gained this ability because he lived in the forest most his life. It is only when he is "speaking animal" that his dialogue contains fluent English.

As a Selkie, Gnash is agile and flexible. He puts these skills in action when he uses the double jump. Gnash is skilful with the bow and upon leveling up is able to shoot multiple arrows at one time.

"The Forest Dweller" plays when the party first meets Gnash.

A new design for male Selkie player characters, called "Babunny", is based on Gnash. 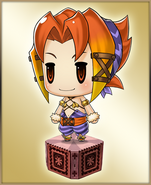 Gnash in the opening movie.

This section about a character is empty or needs to be expanded. You can help the Final Fantasy Wiki by expanding it.
Final Fantasy Crystal Chronicles: Ring of Fates
Community content is available under CC-BY-SA unless otherwise noted.
Advertisement