Water
Gloria is one of three permanent party members of Final Fantasy Legend III. She is a mutant who was sent along with Curtis and Arthur from the future. She is an able healer and a skilled user of White Magic.

This section about a character in Final Fantasy Legend III is empty or needs to be expanded. You can help the Final Fantasy Wiki by expanding it.

After Xagor's defeat, she along with Arthur and Curtis all decide to live in the Present World.

Gloria is a Mutant whose innate element is Water. As with all four main characters in Final Fantasy Legend III, Gloria's possible transformations depend on her current form (see Transformations for more information). Like all four main characters, she's capable of equipping all weapons, armor and she can learn all spells. Her starting stats lean towards attributes in magic power and MP, which make her a potential offensive or defensive mage.

Gloria makes an appearance as a card in the card game. 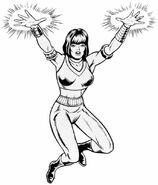