The creature appears as either a giant or a demonic train, depending on the game. Despite these drastically different appearances, it consistently shares the name Glasya Labolas in the Japanese script in all of its appearances and oftentimes in the English localization as well.

Glasya Labolas has appeared alteratively as an enemy, a summon, a boss and a plot element, with its signature attack as a summon being Runaway Train.

The Glasya Labolas appears only in versions that have the Soul of Rebirth dungeons, and is fought in the Unknown Cave. With high HP and attack, it is fought like other Gigas enemies. However, unlike the other Gigas, Glasya Labolas has no elemental weakness to exploit. It will likely prove a highly dangerous opponent if encountered while only Minwu and Scott are in the party.

Appearing for the first time in the series, Glasya Labolas is fought in Crystal Tower. It can inflict Confuse with its strong attacks, meaning that players should wear equipment to protect from it.

Glasya Labolas is fought in Mt. Zozo and is a possible enemy in Dragon's Neck Coliseum. It is presumably related to Hill Gigas, which is from Zozo. It can deal a very powerful Uppercut physical attack. Players can defeat Glasya Labolas using Bio, to exploit its weakness to Poison. It possesses a Muscle Belt which can be stolen. When fought in the Coliseum, high defense and evasion are advised, or the Mirage Vest which guarantees Image, to avoid its physical damage, while Man Eater is advised to defeat it.

Doomtrain is a hidden Guardian Force obtained by using the Solomon Ring while having 6 Steel Pipes, 6 Remedy+ and 6 Malboro Tentacles in the inventory. When summoned it casts Runaway Train, inflicting poison elemental damage and various status effects. Doomtrain has many status effect junctions and can remodel weapons from the inventory and create Elixirs of various grades and stat-boosting items.

Doomtrain is also available as a level 9 GF Triple Triad card, as part of the Queen of Cards sidequest.

In Final Fantasy XI, Glasyalabolas was the name of the Japanese PC beta server, keeping with the game's theme of naming its servers after summons in the series.

Glasya Labolas is fought in 24-man raid Syrcus Tower as the second boss, a homage to its Final Fantasy III appearance. It fights with its fists, and there are many stages to the fight. Throughout these stages, several players will attack Glasya Labolas, though others will need to deal with several enemies spawned in order to align them with the machines that can reduce his charged up damage.

Glasya Labolas is a Wendigo enemy fought in the Cetme District and the Tower of Agito.

Glasya Labolas appears as an enemy, and is a member of the Ogre family. 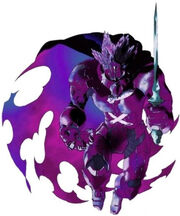 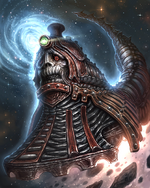 A cursed train believed to be fueled by the souls of the damned. 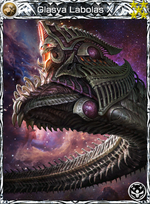 A rampaging vehicle that eats the souls of the damned.

Glasya Labolas X is a support, EX Ability Card, that grants the ability Curse X and creates a large amount of Earth skillseeds.

The Doomtrain appears in the game as a major plot device in season three. It is an Esper summoned by Bruce in combat, but was turned onto the Farplane Express train through the use of Pilocyte, allowing the protagonists to ride it in order to travel the Farplane to combat The Hollow. It is most of the time piloted by Rinora who serves as its conductor.

The 7★ Unit Bruce has the ability "Doomtrain Summon" (グラシャラボラス召喚, Gurasharaborasu Shōkan?, lit. Summon Glasya-Labolas) which uses the Evocation Gauge that has a 75% chance of inflicting death, 80% chance of inflicting all status effects and deals physical damage to all enemies for 3 turns, as well as increasing the unit's Limit Burst gauge.

It is an unique Esper in the sense that it cannot be acquired by the player like the rest of the Espers, and therefore it cannot be either leveled, customized, equipped or Summoned in typical fashion. It can only be used offensively through Bruce's aforementioned ability.

Glasya Labolas appears as an enemy based on its Final Fantasy VI appearance.

Additionally, it also appears as Doomtrain, based on it's Final Fantasy VIII appearance during Quistis's Doomtrain Overstrike Soul Break, learned from the Malboro Tentacle, It deals poison and non-elemental damage equal to 39.6 times the base magic damage, and, like all Overstrike Soul Breaks, is capable of breaking the damage limit. It has a 15% chance each of causing Poison, Silence, Confuse, and Blind. 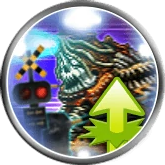 [view · edit · purge]In demonology, Glasya-Labolas is derived from one of Goetia's demons, the mighty President of Hell who commands thirty-six legions of demons. He is depicted as a dog with the wings of a griffin. He is mentioned in the 17th century Grimoire, The Lesser Key of Solomon.