A childhood friend of both Sol and Diana, Glaive has more of a quick wit about him than the others. Like Sol, he is under Aigis's tutelage, hoping to become a swordsman whose name will be inscribed in the annal of Luxian history. At heart, he is both kind and gentle, watching over Sol and Diana with a benevolent smile.

Glaive is a playable character from Final Fantasy Dimensions. He is a youth from the small country of Lux, and is childhood friends with Sol and Diana. He is a rival to Sol, ending up as one of the four Warriors of Darkness chosen by the crystal of Lux.

Glaive has light brown hair in a ponytail, with a spiked up fringe similar to a mullet style. He wears a studded white tunic and purple pauldrons over a blue shirt, brown arm wraps and brown gloves; a short purple half-cloak; blue trousers and brown boots which fold over at the top. His color dominant in his job outfits is purple.

Glaive has a sharp tongue and a blunt way of speaking, though he is a kind person at heart. He tells Sol that his stupidity is enough to "fortify the castle walls", but helps him reconcile with Diana.

A kind-hearted young lad. Childhood pal of Sol, the two have a friendly rivalry.

While traveling across the forest to the Checkpoint to welcome back Aigis, Glaive finds Sol watching an Avalonian airship fly over Lux and engages him a surprise sparring. After the fight, Diana joins the two with her and Glaive revealing they want to welcome Aigis back too. When they reach Lux, seeing Sol unknowingly hurts Diana's feelings, Glaive points out what he did while wrong, getting him to apologize to her. While infiltrating Castle Lux to find the reason for Aigis being called there, Glaive gets himself and his friends in through a passage way he knows.

Glaive begins with the ability Focus, meaning he can strengthen the power of his next used ability for up to three times. It takes up one ability slot. Glaive has high HP growth and his stats lean towards the physical side, benefiting jobs like Monk, Warrior, and later Dark Knight. However, since the stat differences between characters are minimal, and abilities and equipment are of greater importance, he can competently do any job. Jobs also gain stats boosts when they level up, which helps even out stats. 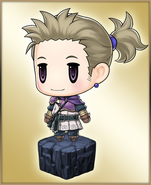 Glaive appears on a card.

Glaive with Sol, Diana, and Aigis.

Glaive as a Monk.

[view · edit · purge]A glaive is a European polearm weapon, consisting of a single-edged blade on the end. It is similar to the Japanese naginata and the Chinese guandao. The word "glaive" has historically been given to several very different types of weapons, however. The word originates from French.