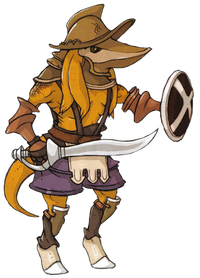 This article is about the recurring elemental swordsman job. For the class of Final Fantasy XIV, see Paladin (job) § Gladiator

Gladiator (剣闘士, Kentoushi? or グラディエーター, Guradiētā?, lit. Gladiator), sometimes abbreviated as GLD, is a job class in the Final Fantasy series all about dealing heavy damage, usually with elements added to their attack. The trade-off is that the Gladiator has low Agility compared to other melee jobs.

The Gladiator is a class exclusive to pre-2021 versions based on the Advance engine. Its skill set is centered around potentially inflicting huge damage all at once, with a significant chance of failure.

Gladiator is an enemy Sky Pirate class for bangaa. Their battle performance is similar to that of a Dark Knight.

Gladiator (GLD) is a job for bangaa after mastering two Warrior abilities. Gladiators wield the powerful blades in combat and can learn three different "Spell Blades" to deal damage. They also have some Fighter abilities to use. When raised right, Gladiators are very powerful and, when equipped with Strikeback, it is difficult to get in a hit.

Gladiator is a job available to bangaa. This job can charge their weapons with elemental properties for stronger attacks. They are nimble melee units that are incapable of equipping heavy armor and so are a bit short in the Defense department, but the highest possible Strength growth makes up for it.

These master warriors are unequalled with a blade, and can wield spears, axes, and bows nearly as well. An excellent front line addition to any party.

Gladiator appears as a recruitable character. He is unlocked in Coliseum on Classic as the First Time Reward.

Initial screenshots for Final Fantasy XIII showed the abbreviation "GLA" in red as a paradigm role, standing for Gladiator. The role for this purpose in the final game is called Commando.

The job's use of elemental attacks for a more varied offensive option is likely inspired by the Mana series depiction of the job class, in where the job gained elemental Saber spells into progression.