Skilled Warriors who can master any blade.

The Gladiator is a job in the Game Boy Advance, as well as the defunct mobile and Steam versions, of Final Fantasy V, found in the secret sea chasm. Gladiator is a powerful physical fighter job, with a wide array of equipment choices, strong stats, and a good selection of commands. Gladiator can also be placed in the back row.

Mastering Gladiator for all four characters in the defunct mobile and Steam versions earns the achievement "Battle Master".

In the Advance version, the Gladiator wears heavy armor and an intimidating mask. Bartz, Lenna, and Faris resemble characters from Saint Seiya. The characters' masks pose a resemblance to some summoned monsters: Bartz to Odin, Lenna to Shiva, Faris to Syldra, and Krile to Carbuncle.

The Gladiator job was redesigned in the now defunct mobile port, in which the characters wear light armor reminiscent of traditional Roman gladiators.

Upon mastery, Freelancers and Mimes gain the Gladiator's base Strength, Agility, and Stamina unless they already have a higher base from another mastered job.

One of the Gladiator's strengths is their variety of equipment. As well as having access to both heavy and light armor, they can wield shields and most weapons, specifically: knives, swords, knight swords, spears, bows, and axes.

The Finisher command can do one of three things:

The ratio between failure, Elemental Attack! and Critical Hit! varies by job level:

The element used depends on the character's crystal element: Bartz's elemental attack is wind, Lenna's is water, Faris's is fire and Krile's is earth. Galuf is given the innate element of earth, and therefore his Finisher ability would take this element, although the player will not be able to see this in a normal playthrough.

Bladeblitz deals a normal physical attack to all enemies equal to 75% of the Attack command's damage. Row modifiers will be ignored if the equipped weapon ignores row, and all special abilities or effects of the equipped weapon will be ignored (however, MP-driven criticals and regular criticals will function as normal). MP-driven criticals will reduce MP once for every target hit. Any non-Heavy target hit by the Lilith Rod will have its effect applied to. Weapons that rely on Magic Power, such as harps and the Wonder Wand, will not work with Bladeblitz.

The Gladiator's learned support ability, Lure, increases the random encounter rate, and can be useful for level grinding. Long Reach is its more potent support ability, allowing the user to hit enemies from the back row for the same damage. 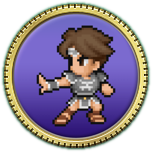