Ruins situated atop a lone island off the southern coast of Bervenia in a region known as Glabados. Sky pirates assigned this name to the ruins as well, its true name lost to history.

The Glabados Ruins (グレバドス遺跡, Gurebadosu Iseki?) are a forgotten temple located in the Glabados region of Ivalice in Final Fantasy XII: Revenant Wings. The game begins in the ruins, and much of the tutorial occurs here.

To the viera I took for my wife, to our beloved children, this gift I leave.—Feolthanos

Inscription in the ruins

Vaan, Penelo, Balthier, and Fran fight their way to the heart of the ruins and approach a dais in the inner sanctum. Two small crystals, one green and one purple, are perched on a scale-like altar. After a mock battle for the crystals, Balthier throws the green stone to Vaan as a welcoming present to the career of sky pirating.

Once Balthier takes the purple crystal, the temple begins to shake, and debris rains from the ceiling. The four escape for their airships outside, but Vaan's airship falls into the abyss as the ground underneath it gives way. Vaan and Penelo grab onto the Strahl—Balthier's airship—as it takes off into the sky.

Later, the party learns that the Cache had held a third crystal, now in the hands of the antagonistic Judge of Wings. They return to the Glabados Ruins to look for anything else that could help them stop her. Within a hidden chamber, they discover an inscription written by Feolthanos, which reveals that he left the Cache of Glabados so that his family could call the Galbana and join him after the aegyl fled to Lemurés. Filo and Kytes also find a map within the ruins, and the party decides to follow it to Roda Volcano, home of the descendants of Feolthanos.

While exploring the Glabados Ruins, Vaan is soon separated from the others. He must find his friends before they leave him behind!

In this tutorial mission, Vaan is separated from Penelo, Balthier, and Fran, and must defeat several Red Flan on his way through the ruins to find them. Penelo is waiting at the first corner, while Balthier and Fran are at the end of the hall. 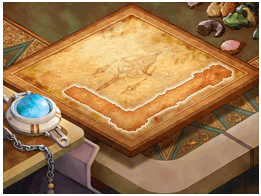 Joined by Balthier and Fran, Vaan and Penelo reach the heart of the Glabados Ruins. But something stands between them and the coveted treasure...

Vaan and the others reach the center of the Glabados Ruins, where they find the auracite crystals that are the ruins' treasure. Before they can take the crystals, they are confronted by Ifrit and a group of Djinn. 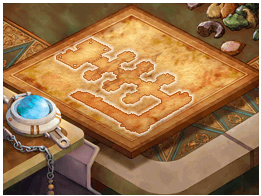 Mission 37: Last Will and Testament[]

The search to uncover the mystery of the Cache has led back to where it all began. What secret lies locked in the cold stone? The answer waits in a hidden chamber of the shattered ruins.

Penelo notices a hidden room in the ruins; the party must battle their way to the room's entrance. Touching the crystal switches found in the hallways opens the door to the secret chamber, where Elder Wyrm appears as the mission's boss.

The ending of Final Fantasy XII depicts Penelo reading a note found by Vaan: "Something more valuable: the Cache of Glabados. I await in Bervenia."

In the War of the Lions rerelease of Final Fantasy Tactics, Balthier mentions that he found himself in Tactics-era Ivalice after touching the Cache, and seeks to find it again so as to return to his own time.

The name of the ruins is a reference to Ajora Glabados from Final Fantasy Tactics.