Cid Pollendina: Oh, shut up and help me remodel the Giruvegan page!
Please expand this article into a full one. The following tasks need to be completed:

On the farthest shores of the river of time... shrouded deep in the roiling Mist... the holy land sleeps: Giruvegan. Who knows the paths? The way to its doors?

The Ancient City of Giruvegan, also known as the Holy Realm, is a location in the land of Ivalice in Final Fantasy XII. It is an ancient city that has faded from memory. Though many have sought to rediscover this forgotten settlement, dense Mist permeates the entire region where the city is believed to be located.

The city does not follow the standards of other cities in Ivalice. The city consists of a giant pit, at the very bottom of which is the Great Crystal. Around the sides of this pit are platforms, going down the way. These platforms are connected by invisible platforms, that appear only when approached. The only other way to travel the city is by the many waystones.

Above the city, only accessible by a waystone guarded by the Esper Shemhazai, the Occuria reside, keeping a watchful eye over all of Ivalice. Never to leave this place, only people deemed worthy may actually see the Occuria.

Ancient city said to lie deep within the Jagd Difohr. A dense mist conceals its actual location. There are some who claim that it holds the secrets of a legendary civilization that flourished before men knew the workings of the world, but none remain who know the truth. Many are the expeditions sent to find this place and record its knowledge, but most have disappeared in the Feywood, or despaired while attempting to understand what artifacts have been found. To this day, we are no closer to discovering Giruvegan, or illuminating its mysteries.

Once the center of Ivalice centuries ago, Giruvegan was ruled by the immortal Occuria. For reasons known only to them, the Occuria closed the gates to the city and let it fall into ruin. As such, not much is known about the once great city. Now, a dense Mist covers the city, and monsters wander its many corridors.

Dr. Cid of the Archadian Empire came to Giruvegan during his search on nethicite and met the rogue Occurian Venat and teamed up with it. Venat came with Cid to Archades where the being taught him the secrets behind nethicite that led to the development of manmade nethicite.

Years later, Princess Ashe and her party come to Giruvegan on their hunt for Dr. Cid who has fled the capital with the Empire's pieces of deifacted nethicite in his possession, claiming to have headed for Giruvegan to acquire more nethicite. They cross the Feywood and summon the Esper Belias to open the gate to the ancient city. Not seeing Cid anywhere, the others wish to wait, but Ashe spots an apparition of her late husband Rasler that beckons her to continue further. They travel through the ancient city until they reach the Great Crystal within where Ashe is summoned to the realm of the Occuria where they brand her the new Dynast King and give her the Treaty-Blade with a mission to seek out the Sun-Cryst and carve pieces of nethicite from it to use as a weapon to crush the Archadian Empire and in turn, the rogue Occurian Venat.

Ashe is left unsure of what to do, with her companions wondering where Cid is. Balthier realizes they had been duped and Cid was never heading to Giruvegan. Instead, his goal had been to lead Ashe to the Occuria.

Giruvegan is located in the far south of Ivalice, in the Jagd Difohr region. To reach it, travelers must cross the Feywood. Even then, entrance is not simple; The Gigas must be summoned so that the gate may open. Giruvegan appears to be a literal realm located on a different plane; nothing of the Feywood can be seen behind the Gate of the Gigas from the Giruvegan side.

Giruvegan, although indoors, still has weather:

Heavy Fog is when the Diakon Entite comes out in The Trimahla Water-Steps and The Aadha Water-Steps areas. During Heavy Fog, Water-elemental attacks are 20% more powerful than normal.

Deep within Giruvegan is the Great Crystal. A giant crystal, inside it sleeps a great core of magicite. Access is guarded by a terrible monster.

These chests only appears in the Zodiac versions. They do not respawn.

These chests only appears in the Zodiac versions. They do not respawn.

The Piscodaemon is a Rank V Mark found in the Gate of Fire area whose hunt becomes available after the storyline events at Giruvegan. Piscodaemon was a nu mou named Ashkroft who became a master of the dark arts and was sealed away by the Gran Kiltias Anastasis, but the seal fades and Ashkroft emerges a demon. The hunt is petitioned by Ivaness in Mt Bur-Omisace.

The exterior and interior parts of the Ancient City each have distinct themes. Outside Giruvegan, the music that plays is the first half of "Ashe's Theme" (アーシェのテーマ, Āshe no Tēma?), while inside Giruvegan before the Great Crystal, the track that accompanies the player is named "Giruvegan's Mystery" (ギルヴェガンの謎, Giruvegan no Nazo?).

The map can be found in The Trimahla Water-Steps in-between the two gate stones. The urn found here is available after completing the events at Giruvegan.

The map from the original Final Fantasy XII that includes all treasure information.

Belias opens the Gate Gigas that leads to Giruvegan. 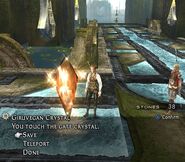 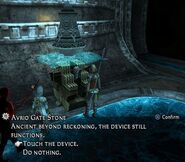 Inside Giruvegan, several Gate Stones and Gates can be found. These stones and gates are named after Greek words, relating mostly time: