Gippal leads the Al Bhed's Machine Faction in Final Fantasy X-2, which strives to spearhead an industrial revolution in Spira by introducing uses of machina to aid everyday life. He is an old comrade to Nooj, Baralai and Paine back from when the four formed a unit in Crimson Squad, and is also in friendly terms with Rikku. He is faced as a boss and is recruitable through the Creature Creator system in the International and HD Remaster versions.

Gippal is an Al Bhed with green eyes with spiral pupils and an eye-patch over his right eye. He has short spiky blond hair. He wears armor over a blue jumpsuit and purple overalls and indigo boots. His wields a large machina mortar with a rounded saw blade as his weapon.

Gippal: Never been this close to a celebrity before.
Yuna: That's nice.
Gippal: I could get used to this.
Yuna: Let's not.
Gippal flirts with Yuna

Gippal has a devil-may-care attitude and is a ladies' man, joking about him and Rikku having made "quite the couple". Rikku calls him a player. He is loyal to his former squad mates, and when learning of Baralai's predicament, does not hesitate to join Nooj in a quest to help. He prides himself on his skill with machinery, telling his comrades no one can use a machina weapon like an Al Bhed.

Gippal had always wanted to be a Crusader, the military branch of Bevelle, but being an Al Bhed, he wasn't eligible, as Al Bhed do not follow Yevon. When he heard the Crimson Squad accepted all comers, he wasted no time in seizing the opportunity and signing up. On a training mission in the Sanubia Sands, Gippal met his teammates: Nooj, an ex-Crusader; Baralai, a Yevonite (most likely an Acolyte); and their sphere recorder, Paine. Throughout their time as teammates, the four learned much of each other and shared many laughs and pondered over their futures.

On the final mission to become full members of the Crimson Squad, they alongside many other applicants were sent to the Den of Woe to investigate a strange happening. Inside the aspirants turned against one another, and Shuyin, a spirit who possessed the entrants to the cave, took over Nooj who pulled his gun on Baralai. Gippal raised his weapon to Nooj's head, and Baralai raised his to Gippal's head as they were taken over by the malevolent spirit.

Paine broke apart the triad and Shuyin's spirit left Gippal and Baralai, but secretly lay low inside of Nooj. They exited the den and met up with the officials who told them they had passed the test and were now Crimson Squad members. Their immediately assigned first mission was to guard Maester Wen Kinoc during Operation Mi'ihen, but as soon as they turned, the guards attempted to shoot them.

The four escaped and met up outside Rin's Travel Agency on the Mi'ihen Highroad where they decided to split up. Paine, still recording, had her camera on as a possessed Nooj shot Baralai in the back. When Gippal heard the shot he turned and was shot in the chest. Nooj turned fire on Paine. All survived, but were separated, thinking Nooj as a traitor.

When Gippal pays a visit to Home, the Al Bhed's hideout, he meets Auron at the surrounding desert. He talks about rushing into the fight and being a "jackass". His partner gets radioed that the Guado are attacking Home, and they both run off. It is assumed Gippal evacuated on the Fahrenheit with the other Al Bhed.

After Yuna defeats Sin Gippal starts the Machine Faction in the abandoned Djose Temple with a connection on Bikanel Island where people can excavate the desert. At the temple, Gippal meets Yuna, Rikku, and Paine who want to go digging at the desert, but Paine plays it off as though they have never met. Nooj is now the meyvyn of the Youth League, though still secretly under Shuyin's control, and Baralai is praetor of New Yevon. Though he is neutral, Gippal provides his machines to both sides.

Gippal goes to the Bevelle Underground to seek out Vegnagun and meets up with Nooj and Baralai, finding the hole where Vegnagun used to be. Shuyin's spirit leaves Nooj and enters Baralai who jumps into the hole and the two follow him. When Yuna enters a connecting hole she meets with Shuyin on the Farplane, who is actually Baralai, and Gippal and Nooj tell her to "take care of things topside."

Soon after Yuna's fall, Rikku and Paine throw a CommSphere into the hole finding out it was of no use, but when Yuna returns to Celsius Shinra reports the CommSphere has been fixed. The footage shows Gippal who states that whoever made the CommSphere is a genius, and claims he is also a "genius" for fixing it, although communication through the sphere wasn't working.

After Gippal and Nooj reach Vegnagun, YRP and the Leblanc Syndicate catch up with them, and they take on Vegnagun and Shuyin together. Baralai is released as Lenne has Shuyin rest in the Farplane. Afterward, the three factions forget their differences and Gippal joins Nooj and Baralai in a public appearance in Luca to address Spira on their plans for a peaceful and cooperative future.

Gippal can be recruited as a party member in the International and HD Remaster versions through the Creature Creator system. The player must defeat him in the Den of Woe and set up a Special Monster Pod in Djose Temple. Gippal wields his machina gun in battle and retains many of his moves from his boss battle. Like all monster allies, Gippal is AI-controlled.

Gippal is fought as an illusion made by the pyreflies in the Den of Woe in Chapter 5, once the player has opened the way collecting ten Crimson Spheres. Gippal can also be fought in the Fiend Arena in International and HD Remaster versions. 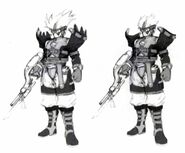 Gippal meets Auron before the Siege of Home event in Final Fantasy X.