A rogue Black Tortoise l'Cie who has forgotten his Focus, Gilgamesh wanders the world in search of a purpose. In his quest for strong spirits and stronger blades, he appears on the battlefield to challenge all present to a duel, hoping to test their mettle as well as their metal.

Gilgamesh Ashur is a non-player character who serves as a boss in Final Fantasy Type-0. He is a playable character in Final Fantasy Awakening. He is a Black Tortoise l'Cie who was raised in Lorica alongside his advisor and close confidant, Enkidu Uruk.

Gilgamesh is a recurring character in the Final Fantasy series, and in Final Fantasy Type-0 retains many staples of his previous appearances, such as being fought on a bridge, having an eight-armed boss form, and collecting weapons.

Gilgamesh is a colossal warrior with dark skin and red facial tattoos or face paint. He wears his black hair in a ponytail, and his wounded left eye is always closed. He wears a red, black, and gold suit of armor; a red helmet and silver plating hide his visage. Black fabric covers Gilgamesh's legs, and silver, clawed boots cover his feet. A red cape with a black underside hangs loosely over Gilgamesh's back; attached to it is an enormous red shield. Gilgamesh wields a massive red and black blade with a silver tip. In battle, he holds it over his shoulder and swings it effortlessly with one arm.

Gilgamesh has a second form, in which he trades his cape and shield for six additional arms. Covered in red and black armor, each arm holds one of the ultimate weapons available to the members of Class Zero.

Pillage! Plunder! Leave nothing in my wake!

Gilgamesh seeks a purpose, having forgotten his Focus, and he yearns to collect strong weapons. Suffering from amnesia, he wanders across Orience, challenging anyone he comes across to a duel.

Gilgamesh Ashur is inarticulate in comparison to his previous incarnations. Native Japanese speakers refer to his manner of speech as "samurai talk," crude use of the Japanese language, and can find his dialogue difficult to understand due to its ambiguous context and lack of certain particles.

Gilgamesh is a former king of Lorica, chosen by the Black Tortoise Crystal to become an immortal l'Cie with a mission to the Crystal. Charged with protecting his country, he caused problems for his nation. Gilgamesh begged his advisor, Enkidu, to keep him on the path intended for him, but over time he forgot these events. In Aqu. XII, 842 RG the Militesi Empire launches an Ultima Bomb onto the Black Peristylium, annihilates Lorica, and salvages the Crystal from the impact site.

Gilgamesh appears during the battle at the Big Bridge, where he causes trouble for the legionaries of the Dominion of Rubrum who are trying to bring down the Militesi gates so the Secundus Vermilion Bird l'Cie Caetuna can summon Alexander. The members of Class Zero find Gilgamesh waiting for them atop a pile of destroyed MAs, and engage the l'Cie in battle. Gilgamesh simply walks off if Class Zero defeats him, but if they lose against him, he expresses his disappointment in its members' performance and goes off to find a stronger opponent.

Later on in Ingram Gilgamesh encounters Machina Kunagiri, who has become a White Tiger l'Cie. Gilgamesh regains his memories of Enkidu, and challenges Machina to battle, but is defeated. The Black Tortoise l'Cie's fate following this duel is unknown.

In Pandæmonium, the Land of Judgment, Class Zero encounters a warrior resembling Gilgamesh who will challenge the cadets at the bottom of the Black Tortoise Crevasse while Militesi airships bombard the site. This appears to be a shadow of the real Gilgamesh.

During the third playthrough, Gilgamesh opens portals around Orience to challenge anyone with the courage to face him in one-on-one duels. The ability to open dimensional rifts could be related to the concept of Agito, a person meant to open the doorway to the realm of the dead, although Gilgamesh is never referred to as such. Gilgamesh never entered Pandæmonium like the other remaining l'Cie, and instead may have escaped Tempus Finis with this power. This version of Gilgamesh has eight arms and carries all the ultimate weapons, which he yields to his opponent upon defeat.

After Orience is freed from the spiral, either Gilgamesh himself or just his suit of armor, appears on a throne in the Inner Sanctum in the Black Tortoise Crevasse with Lorican soldiers surrounding the throne. According to Director Hajime Tabata, the l'Cie are doomed to gradually lose their power and perish alongside the Crystals.[1]

Gilgamesh serves as a boss at the end of the mission, "The Clash on Big Bridge." The battle concludes the mission regardless of the outcome. Even if Gilgamesh is at a higher level than the members of Class Zero, it is possible to defeat him by exploiting Breaksight.

Gilgamesh is fought again by Machina alone in Machina's Struggle, where he must be brought down with Breaksight strikes.

A shadowy form of Gilgamesh is fought in Pandæmonium during Tempus Finis, with Militesi ships bombarding the area from the background.

Gilgamesh's eight-armed form serves as an optional boss after the player beats the game twice and completes all available side-story missions. After "Chapter 4: The Last Queen's Return to Oblivion" ends, a portal to the Rift appears in one of the following locations: the Black Tortoise Crevasse in the Old Lorica Region, near Ingram in the Azurr District, in the marshes of Rilochy Province, near the entrance to Roshana Province, and before the shallow waters of the Innsmouth Region. After the player enters the portal Gilgamesh selects a random member of Class Zero to challenge to a one-on-one duel. If the member Gilgamesh challenges is defeated, he steals their equipped weapon. Final Fantasy Type-0 is the first game in which Gilgamesh takes the player's equipped weapon if they lose. If Gilgamesh is the one to lose, he relinquishes the member's ultimate weapon.

Gilgamesh is the only enemy whose in-game model can be viewed up close in the enemy compendium.

Gilgamesh wields a two-handed sword. His strongest skill allows him to summon several bats which damage all enemies, but he does not transform to his eight-armed form. Gilgamesh's unique ability is to forcibly draw his opponents close at him to strike them. He, alongside Andoria, are the hardest to defeat in the Arena and Samsara Realm. Like Andoria, Gilgamesh is fought as a boss twice, and he can wipe out the player's entire group with his special attacks as well as his strongest skill. He can defeat one of the player's allies while they are escaping the premises. Like his companion Enkidu, Gilgamesh is immune to freezing when the mage or Caetuna hit him with freeze magic.

In World Boss, Gilgamesh fights the player alongside Caetuna, Zhuyu and Nimbus. His skills are slightly augmented and his strongest skill can wipe out the player for a limited period, but it is slow enough for one of the player's allies to attack before Gilgamesh can execute it.

Like Andoria, Gilgamesh has his upgraded Augite form and all of his attacks can manipulate with solidifying ice. Gilgamesh's Ice Augite form requires in his 2★ Mythic and 18 Powered Lorican shards in order to be obtained. Once it was obtained, Gilgamesh demonstrates his two-handed sword skills and forms a golden aura within him and he now glows in an blue aura afterwards. 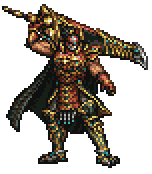 Gilgamesh's role in Final Fantasy Type-0 is the first of the character's overall to resemble the story of his real-life counterpart. All previous Lorican l'Cie are also named after characters from the Epic of Gilgamesh.

A piece of concept art portrays Gilgamesh in his l'Cie form wielding two kinds of weapons obtained from the other three Crystal-States of Orience. They are:

The Agito Arecia Al-Rashia and Gala wanted to find was a person with the power to open Etro's gate to reach the unseen realm. Gilgamesh gains the power to open portals to other dimensions, but is never referred to as Agito. It is unknown if his power is the one the deities were looking for.

Some fans believe Orience is Gilgamesh's home world and origin, as the Gilgamesh depicted in multiple games in the series appears to be the same person, though his appearance keeps changing. Gilgamesh being a Lorican l'Cie would explain his colossal size and his common choice of armor, as well as his obsession with collecting "weapons of legend", as Lorica used the Crystal's power to augment weapons to fight the other Crystal-Nations and their l'Cie, and the king of Lorica was in charge of protecting the weapons. He gains the ability to open dimensional portals in Final Fantasy Type-0, a method he is implied to use to travel between Final Fantasy worlds in other games (the Void has the power to transform, which could contribute to his changing appearance). However, his demeanor is different in Type-0 than in most other Final Fantasy games, and it has never been officially stated Gilgamesh would hail from Orience. The game's director has also said in an interview that Orience l'Cie cannot survive after the Crystals lose their power.[1] Another likely home world for Gilgamesh is the Planet R of Final Fantasy V, where he debuted.

In the Japanese version of Final Fantasy Type-0, Gilgamesh is voiced by Kazuya Nakai, who previously voiced Wakka in Final Fantasy X.

In the English version, he is voiced by Keith Szarabajka, who also voiced him in Dissidia 012 Final Fantasy.

Concept artwork of Gilgamesh and his various weapons.

Concept artwork of Gilgamesh on the Big Bridge. 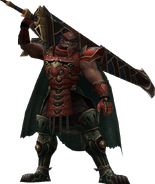 Gilgamesh on the Big Bridge.

Gilgamesh on the Big Bridge.

Gilgamesh speaks to Enkidu in a flashback.

Ace, Seven, and King battling Gilgamesh.
Add a photo to this gallery

[view · edit · purge]Ashur is an East Semitic god and the head of the Assyrian pantheon in Mesopotamian religion.