Cid Pollendina: Oh, shut up and help me remodel the Gilgamesh (character)/Theatrhythm page!
Please expand this article into a full one. The following tasks need to be completed:

A worthy opponent who Bartz faces time and again. Though drawn to battle, upon realizing he cannot win, Gilgamesh flees with no more than a pointed barb. Yet in the end, he gives up his life for his rival... 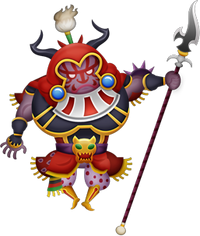 Gilgamesh appears as a boss-type and regular enemy in Battle Music Sequences for Final Fantasy V.

Gilgamesh is an enemy in Battle Music Sequences for Final Fantasy V and the Dissidia series. 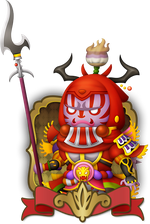 Gilgamesh appears as both a regular and boss-type enemy, and makes his playable debut as the secondary antagonist representing Final Fantasy V. Added via update on 5th July, 2017, he is obtained by collecting Dark Crystal Shards.

His Limit, Strongest Sword, deals damage to boss-type enemies, though has a 50% chance of inflicting either 1 point of damage, or high damage in direct proportion to Magic.