Gilgamesh is an Elite Mark in Final Fantasy XII petitioned by Montblanc. The hunt can be undertaken after the storyline events in Draklor Laboratory are complete. He is notable for the Genji equipment that can be stolen from him.

Gilgamesh is fought twice in the Lhusu Mines. The first is on the bridge just to the west of the gate crystal, in an homage to the "Clash on the Big Bridge" (which is also the name of the hunt) from Final Fantasy V; a reworked version of the iconic theme plays during both fights. Gilgamesh escapes after defeat, and the player must find the Site 11 Key and venture deep into the mine to Site 7. During the second fight, Gilgamesh's HP is triple what he previously had, and his stats are raised.

To get deeper into the mines, the player must complete the hunt for Antlion, after which the Site 11 Key appears in the Hunters' Camp in Phon Coast, on the ground next to a Fallen Bhujerban.

Gilgamesh and his dog Enkidu are also fought in the Zodiac versions' Trial Mode in Stage 94 where the following weapons can be stolen from him: Masamune (common), Kumbha (uncommon) and Wyrmhero Blade (rare).

An ancient Man of Mystery, traveling the Dimensions with his lone Companion, Enkidu, in search of a legendary Sword. It is said he confronts all Adventurers he meets and challenges them for their Weapons. Each of his six Arms bears a Weapon of great Fame, yet there is no Evidence that any are the genuine Article. Petitioned as a Mark by a Swordsman bereft of his beloved Blade.

That was merely a test of your strength mortals, a prelude if you will, the real contest begins now!

Gilgamesh when he pulls out a new sword

Gilgamesh and his dog Enkidu begin the battle buffed, and Gilgamesh's positive statuses renew whenever he pulls out a sword. His attacks only damage one party member at a time.

When Gilgamesh's HP is left around 40%, he draws an imitation of Zidane Tribal's Orichalcum from Final Fantasy IX, and the party has the opportunity to steal his first Genji set: Genji Shield and Genji Gloves. After Gilgamesh's HP drops close to 30% he will pull out his replica of the Tournesol.

After every cutscene the player can steal more items from Gilgamesh. Stealing from Gilgamesh in both battles is the only way to get a complete set of Genji equipment. There are five phases one can steal from him. The first three phases are Potions.

The scenes that will play following the battle differ depending on whether the player defeats Enkidu before Gilgamesh loses 20% HP or doesn't kill Enkidu before then.

Before the fight the player should buff with protective spells; a gate crystal is located before entering the bridge. When the fight begins the party should dispel both Gilgamesh and Enkidu's positive statuses. If the party has the Nihopalaoa accessory, the player can use it to sleep Enkidu, then oil him and fry him with Fire-elemental spells; this is especially powerful with a weapon that boosts fire damage. The party will have an advantage if they defeat Enkidu first.

Because Gilgamesh's positive statuses renew the player can set up gambits to dispel them.

Gilgamesh and Enkidu enter the battle buffed, and Gilgamesh regains his buffs whenever he pulls out a new sword. This time Gilgamesh uses status inflicting magicks, such as:

Gilgamesh's standard attacks are strong, as his stats have increased since the first battle. His attacks chain often. When about 30% of his HP is drained, Gilgamesh will use his special attack, Bitter End, and has chance of inflicting Sap to the party. Once the party has drained 60% of Gilgamesh's HP he draws out the Tournesol replica, and the party can steal the Genji Helm.

The player needs to do this before having drained about 70% of his HP, because then Gilgamesh will pull out a replica of the Wyrmhero Blade; saying "Quake, mortals! You face the blade of legend!", and erects a paling. During this period Gilgamesh can be lethal: his attacks can chain up to 12 hits, meaning, once his attack connects, the character is dead. His special attacks are replaced by Monarch Sword and his paling fades after he executes Monarch Sword twice.

After Gilgamesh's paling fades the player can steal the remaining piece of Genji equipment: Genji Armor. After defeating him, a cutscene will follow as the party leaves the battlefield (the cutscene varies depending on who is the party leader).

As per the first encounter, the scenes that play following the battle differ depending on whether the player defeats Enkidu before Gilgamesh loses 20% HP or not.

There is a save crystal before Gilgamesh, and the player should buff the party before engaging. If the party's levels are divisible by 2, 3 or 4, the player should set Remedy or Esunaga gambit. The player can also purchase the Black Belt accessory, which gives immunity to Disable. If the party is on an optimal level, the members are immune to the spells, but Gilgamesh will still waste time casting them. Any level that isn't an even number and isn't divisible by three is great for this purpose.

The party should first dispel Gilgamesh's and Enkidu's buffs and focus the party's attacks on Enkidu. If the party's level is set on prime number they will have more time defeating Enkidu, and if not, they can use the Nihopalaoa trick to sleep Enkidu, then oil it and fry it with Fire spells. A good trick is to use Flame Staff, or other weapon with affinity to Fire, to deal increased damage. Before defeating Enkidu, players can steal Hell-Gate's Flame from it, required in making the Tournesol.

After defeating Enkidu, the player should ensure the party has Vanish or Protect. Each time Gilgamesh pulls out a different sword the party should dispel his positive statuses.

To make stealing items easier the player can activate the Steal gambit on one or even all characters and disable the gambit when stealing is no longer needed.

In the Zodiac versions, the Masamune can still be acquired from a treasure in the room where Gilgamesh is fought the second time. It is possible to acquire the Masamune even during the battle.

Defeating Gilgamesh unlocks his sprite in the Sky Pirate's Den and awards the "Master Swordsman" trophy/achievement in The Zodiac Age. 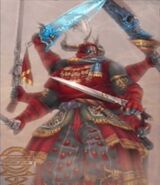 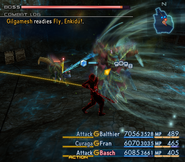 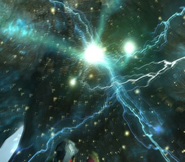 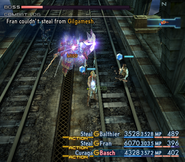 Throughout the battles Gilgamesh wields various famous swords used by the protagonists of other Square Enix games. (See a full list here.)

Gilgamesh's special attack is called Ultimate Illusion (Kyūkyoku Gensō (究極幻想?) in the Japanese version), a synonym for "final fantasy". In the German and Italian versions, it is named Finale Fantasie and Fantasia finale, respectively. While using the attack, Gilgamesh cries "This sword I wield... is no counterfeit!", although his swords are fakes. In Dissidia 012 Final Fantasy, this attack is used as Gilgamesh's perfect EX Burst.