Gilgamesh uses weapons from various Final Fantasy games, as well as one from Dragon Quest (also known as Dragon Warrior). The swords differ from their appearances in their respective games, and the Bestiary states none of the swords is authentic. Like most appearances of Gilgamesh, he alludes to his original appearance in Final Fantasy V.

Gilgamesh retains all the features that typically characterize him: an arsenal of weapons, red and orange clothing and a gray complexion. Gilgamesh has six arms, differing from the usual eight arms. His clothing is more regal with more gold decorations, possibly to fit in with the Ivalice setting.

Gilgamesh is a battle-hungry sword collector who is nonetheless an honorable fighter, and like his other appearances, is not openly hostile towards the party. His personality in Ivalice is more menacing, characterized by his more threatening dialogue and harsher voice than many of his other appearances. Gilgamesh is still a comic relief character, however, with his comical moments of failure.

Throughout the battles Gilgamesh wields various famous swords used by the protagonists of other Square Enix games. When he first appears he only uses unnamed katana that uses the model from the weapon Kotetsu, but as the fight progresses he draws his other swords. As a reference to Excalipoor, the weapon Gilgamesh mistook for the legendary Excalibur in Final Fantasy V, Gilgamesh's weapons are counterfeit versions of the real items.

Gilgamesh also wields the Wyrmhero Blade, his ultimate weapon that he uses in the last phase of the second battle with him. Unlike his other weapons the Wyrmhero Blade appears to be genuine, with no cosmetic differences from the version the player can acquire. When Gilgamesh is defeated he leaves the sword stuck in the dirt, and examining it prompts the message "Appears to be just an ordinary sword of legend". As the player leaves the area, Gilgamesh returns to seize the sword before fleeing.

Gilgamesh became feared across Ivalice as a sword collector and an unmatched duelist. Montblanc posts a bill for an Elite Mark asking Clan Centurio hunters to track down the "Ancient Man of Mystery". When Vaan approaches Montblanc concerning the bill, the latter tells him that an individual has wagered his sword in combat with the Ancient Man of Mystery and lost, and that this mysterious adversary is to be found on a bridge somewhere in the Lhusu Mines.

The party gives chase to the man of mystery and finds him on a bridge in Lhusu Mines, where he is looking for the "sword of legend" and attacks the party as they accost him. Upon losing, Gilgamesh flees with his dog Enkidu at his heels, falling off the bridge to the mines' lower levels. The party tracks Gilgamesh down again and defeats him. Gilgamesh again flees, but as the party exits the chamber the battle took place in, he sneaks back to nab the sword of legend he left on the ground.

The party runs into Gilgamesh again on their quest for the ultimate fishing rod. They follow clues to the Barheim Passage where they find Gilgamesh hunting for legendary weapons. He explains he isn't there to spill their blood, but to hunt for a sword; he even refers to them as friends. He says, "There was no treasure, a useless stick I found". He relinquishes the fishing rod to the party before departing.

Gilgamesh wanders with Enkidu at the Gates of Shattered Time. When he spots Vaan's party, he recognizes them as the people who had previously battled him, and vehemently denies that he, in fact, lost.

Deciding that fate had brought them back together to fight, he takes out his swords and attacks Vaan and two other party members. Gilgamesh is defeated and flees for his life.

Gilgamesh is fought twice in the Lhusu Mines after accepting the Elite Mark from Montblanc. During the first fight Gilgamesh uses basic attacks, but in the second fight he is a much more deadly foe with his HP tripled and new attacks. Many attacks are level based, such as Level 3 Disable, similar to Blue Magic spells he could wield in his Final Fantasy V appearance. Gilgamesh also gains additional cinematic attacks in his second fight.

Gilgamesh changes swords in fight, and Genji equipment can be stolen from him at certain HP percentages. He is the only Elite Mark with a change of battle theme. He is treated like a boss battle with an HP bar on screen.

Completing the hunt earns 10,000 gil and the Masamune, as well as his sprite in the Sky Pirate's Den. In the Zodiac versions, the player will receive the Excalipur instead of the Masamune, but the latter can still be acquired inside a treasure in the room where Gilgamesh is fought the second time. This can be obtained regardless if the hunt was accepted or not.

Gilgamesh and Enkidu are fought on the Trial Mode on Stage 94 in the Zodiac versions. He is the same as the latter battle with him in the main game, but different weapons can be stolen from him: Masamune (common), Kumbha (uncommon) and Wyrmhero Blade (rare).

As part of the fishing minigame, after the second battle with Gilgamesh, the swordsman will appear in a niche at the end of the bridge at the Barheim Passage Zeviah Span. He hands the party the Matamune fishing rod and leaps away with Enkidu hot at his heels. 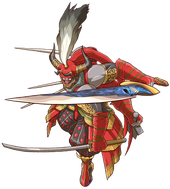 The greatest swordsman in all of Ivalice... or so he says.

Gilgamesh returns in the mission Battle on the Big Bridge, wandering around with Enkidu at the Gates of Shattered Time. He attacks Vaan and two other party members and summons more Enkidus into battle to assist him. Upon being defeated he flees for his life, but not before alluding to his position as a summon.

After felling Gilgamesh in battle the party unlocks his sphere on the Ring of Pacts. Gilgamesh is a Rank III non-elemental melee Esper, sharing the same rank and spot with Odin, although Gilgamesh is more powerful and also has a special attack. His normal attack, Slice Thrice, hits the enemy three times, while his special attack, Masamune, deals physical damage to one target ignoring their defense.

In the English version, Gilgamesh is voiced by John DiMaggio of Futurama fame, who also voices Migelo, as well as the Final Fantasy X characters, Wakka and Kimahri.

He is voiced in the Japanese version by Daisuke Gori, who voiced Fungus in Final Fantasy: Unlimited, making it his final voice role in the Final Fantasy series before his death.

Gilgamesh's iconic theme, "Battle at the Big Bridge", appears during his battle in Final Fantasy XII. It is an arrangement by Hitoshi Sakimoto titled "Battle on the Big Bridge [FFXII Version]", and is the background theme for the two encounters with Gilgamesh and Enkidu at the Lhusu Mines.

The theme was released as the thirteenth track of the third disc on the Final Fantasy XII: Original Soundtrack.

"Battle on the Big Bridge" does not play during the battle against him in Final Fantasy XII: Revenant Wings. The music for the area that plays in the battle is "The Estersand". 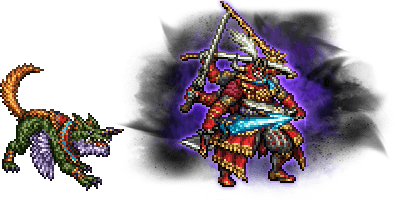 Gilgamesh and his fake Buster Sword.

Gilgamesh with all of his swords.

Gilgamesh approaches the "sword of legend".

Promotional artwork for The Zodiac Age.
Add a photo to this gallery