Tetsuya Nomura and Yoshitaka Amano[1]
Gilgamesh is an antagonist in Final Fantasy V who is a recurring boss. The right-hand man of Exdeath, Gilgamesh battles the Light Warriors on many occasions, declaring Bartz Klauser his rival. Unlike Exdeath, Gilgamesh has a strong sense of honor, having respect for his rivals. Gilgamesh wields the rare Genji equipment and a wide variety of weapons in battle, and on one occasion, fights alongside an ally named Enkidu. Though antagonistic toward the party, Gilgamesh serves as comic relief as opposed to a serious threat.

Gilgamesh is the first recurring character in the Final Fantasy series, and has since made numerous appearances in the series retaining many of his characteristics from Final Fantasy V, such as his affinity to search out swords of legend. Some of his appearances allude to his Final Fantasy V appearance and suggest he has crossed universes.[note 1]

Gilgamesh grew up in a village of warriors. The Genji equipment sets were ancient and precious sets of armor from the village passed on to its best warriors upon proving their worth in battle. It is said that the centuries of "blood, sweat, and dust" accumulated on the Genji equipment have made them extremely resistant.[1] At some point, Gilgamesh came to work for Exdeath.

When three of the Light Warriors—Bartz, Lenna Charlotte Tycoon, and Faris Scherwiz—came to Galuf's world, Exdeath imprisoned them in Castle Exdeath, holding them hostage to warn Galuf Halm Baldesion to call of his attack. Gilgamesh was commanded to guard the three prisoners, but Galuf arrived alone to rescue them. After Galuf dealt great damage to Gilgamesh, Gilgamesh balked, before masking his failure by saying Galuf had had "enough of a beating today" and warning him to not "step out of line again" before fleeing.[2] This allowed Galuf to save the trio, reuniting the Light Warriors.

The Light Warriors left across the Big Bridge, where Gilgamesh halted their progress, having hid behind a door waiting for them. When the warriors dealt great damage to him, he appeared to balk again, before casting Protect, Shell, and Haste on himself and continuing. After they prevailed, Gilgamesh once again made an excuse for failure by claiming he had remembered something and fled, promising that they would meet again.[3]

When Xezat Matias Surgate's fleet sieged Castle Exdeath, Gilgamesh attacked the fleet. The Light Warriors battled him once again, with his ally, Enkidu, arriving late to the battle, after having ruffled with Xezat. The Light Warriors prevailed, and Gilgamesh was thrown into the ocean after attempting to take Galuf with him. Swearing revenge, he swam off.[4]

When the Light Warriors—with Krile Mayer Baldesion in place of Galuf, who had fallen to Exdeath—infiltrated Castle Exdeath, they attempted to open a treasure chest in the room below Exdeath's throne. Gilgamesh had already taken its treasure: a blade, the Excalipoor, which he had mistaken the Excalibur, the strongest of swords. Gloating at having taken the blade, Gilgamesh fought them, making note of Galuf's absence. After they dealt great damage to him, Gilgamesh transformed into his true form, hoping to use the Excalibur only to feel betrayed as the Excalipoor was unable to harm them. Exdeath banished Gilgamesh to the Interdimensional Rift as punishment for Gilgamesh's repeated incompetence.[5][note 2][note 3]

Gilgamesh battled the various demons of the Rift while there, before running into the Light Warriors again as they made their way through to confront Exdeath. Gilgamesh mistook them for beasts before pausing as he recognized Bartz. He expressed his displeasure for the Rift and a wish to join the Light Warriors for adventures after Exdeath was defeated, stopping just short of asking them to consider him a friend before fleeing.[7]

When the Light Warriors battled Necrophobe, Gilgamesh supported them, saying he would be a "jerk for all of history" if he abandoned them on their quest. As Necrophobe promised to make Gilgamesh the first to die, Gilgamesh inexplicably gave final words to the four Light Warriors: complimenting Krile's lineage by praising Galuf, encouraging Faris to fall in love or otherwise embrace her gender, commending Lenna's selflessness toward animals, and expressing envy for Bartz's companions and a desire to have fought him once more. After this, Gilgamesh used Self-Destruct to defeat Necrophobe, seemingly sacrificing himself.[7]

Later games imply that after the events of Final Fantasy V, Gilgamesh traveled to other dimensions.[note 1] In Final Fantasy VIII, during the battle with Seifer Almasy in Lunatic Pandora, Odin's sword cuts a hole in the sky after defeat, out of which Gilgamesh appears, defeating Seifer and asking about the "dimensional interval".[8] In Final Fantasy XIV, at the end of "Don't Do the Dewprism", Gilgamesh mentions leaving through the "rift that lies between" to other worlds, later being reported to have left to settle some loose ends in the, "Interspectorial Rift," after the effects of his earlier dewprism poisoning wore off.[9] In Dissidia 012 Final Fantasy, Gilgamesh mentions stumbling into World B while traveling through the Void and the worlds connected to it.[10]

Gilgamesh is a humanoid with a pale gray complexion, wearing thick red/orange armor (the Genji armor) and a cape, giving him a knightly appearance. His battle sprite contains a battle pose with his knee bent forward, presumably signifying readiness for combat. He wields a lance, reminiscent of the Dragoon job.

After his "morphing time" in Castle Exdeath, Gilgamesh's true form is revealed. He has multiple limbs, all holding different weapons, and no longer retains his sprite's battle pose, instead standing tall and upright and his armor has thinned. Despite his appearance change, Gilgamesh's personality remains the same.

Enough expository banter! Now we fight like men! And ladies! And ladies who dress like men! For Gilgamesh...it is morphing time!

Gilgamesh is a noble, foolhardy, and haughty challenger who respects his opponents, but lacks the skills to match his bravado. He presents himself with an unearned, boastful confidence when he faces the Light Warriors in battle, often before making excuses and fleeing when they prove more than he was prepared to handle.[2][3] Though he speaks in knightly, upper class tone, he is otherwise unrefined and clumsy, falling to the sea when trying to drag Galuf with him,[4] and brandishing the Excalipoor without checking if it was the authentic Excalibur.[5]

While he is Exdeath's right-hand man, Gilgamesh is not necessarily evil. He respects his opponents, considering Bartz a rival, and despite clashing with them many times, has no ill will toward the Light Warriors, stopping short of asking them to consider him a friend (despite them exchanging few words, and oftentimes appearing confused, in response to him).[7]

Gilgamesh is primarily motivated by will to prove himself as a challenger, but struggles due his fear leading him to run from fights. His unearned confidence and the excuses he makes after failing stem from a desire to project strength, with his fleeing thereafter possibly with the intent of preserving a reputation. When in the Interdimensional Rift, Gilgamesh's mask further slips as he reveals his fear of the Rift and wish to flee. Gilgamesh completes his character arc when he joins the Light Warriors and overcomes his fear, staring down Necrophobe and using Self-Destruct to slay the demon, as opposed to simply running again.[7]

Gilgamesh presents a variety of combat abilities. He uses numerous Blue Magic spells against the Light Warriors, and with his lance, makes use of the Dragoon's Jump ability. Gilgamesh can transform into a larger six-armed form which he uses to wield many weapons at once.[5] Although Gilgamesh is cowardly and runs from fights, the Light Warriors are never able to defeat him and he can hold his own against them, hinting he is stronger than his cowardice would suggest.

When in the Interdimensional Rift, Gilgamesh is implied to be capable of traversing it to visit other dimensions.[note 1]

Gilgamesh is a recurring boss who knows many Blue Magic spells, as well as the Dragoon's Jump ability. Gilgamesh brings Enkidu to one of his battles. In total, Gilgamesh is fought four times as a boss, and appears in two battles as a scripted encounter; if the player did not open the treasure chest in Castle Exdeath, the last three encounters are skipped. Battles with Gilgamesh present a great opportunity for the player to steal his Genji equipment.

"Battle at the Big Bridge"

According to the fifth "Chocobo's FF Laboratory" feature published in the November 1993 edition of V-Jump, the initial design for Gilgamesh was created by Tetsuya Nomura, although Yoshitaka Amano was the one who drew the character's final artwork. The magazine states that Nomura's initial design looked like a cross between Gilgamesh's first and second in-game forms. Additionally, Hironobu Sakaguchi used the issue to shed further light into Gilgamesh's past.[1]

In September 2008, Square Enix released a Gilgamesh figure as part of their Master Creatures line. 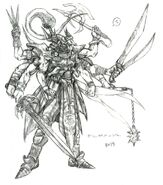