At long last! The ultimate sword... is... MINE! Now I can finally go home! Hey, where did YOU come from? Oh, you mean you were looking for the Excalibur, too? How rude of me. I mean, the four of you come all this way... Of course I'll let you have the sword. ...
I'd say you've been hitting the oxyale a bit hard if you believed THAT!

Gilgamesh, before the battle

Gilgamesh is an optional boss in the Dawn of Souls and succeeding versions of the original Final Fantasy, fought on Floor B5 of the Lifespring Grotto. He appears randomly at several locations on the floor, and must be beaten before the party can progress further into the dungeon. The mermaids give clues as to where he can be found.

Gilgamesh is a recurring character in the Final Fantasy series as a dimension-trotting sword collector. 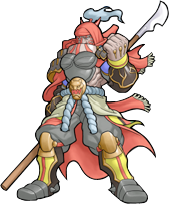 Gilgamesh has a lot of Strength and can easily wipe out party members in a single hit. He tends to use Excalipoor as often as his physical attack, dealing 1 HP of damage to a single character. His Magical Defense is also high. Gilgamesh may occasionally use Wind Slash on the entire party for about 100 damage, but it is not as much of a threat as his strong regular attacks.

Protect is a good spell to use to reduce the damage from Gilgamesh's physical strikes. Using Haste and Temper on the party's physical attackers is always a good idea. Casting Invis, Invisira, or using the White Robe as an item to raise the Evasion of weaker party members may help if his physical attacks prove to be too overwhelming.

Retrieved from "https://finalfantasy.fandom.com/wiki/Gilgamesh_(Final_Fantasy)?oldid=3217507"
Community content is available under CC-BY-SA unless otherwise noted.