The weapon collecting, dimension hopping, self-proclaimed "legendary swordsman". Although possessing the body of a fiend, he holds a strong sense of loyalty and compassion.

Gilgamesh is a secret playable character in Dissidia 012 Final Fantasy, representing Final Fantasy V. Introduced as Exdeath's most prominent lieutenant, he was banished to the Interdimensional Rift after repeatedly failing his assignments. Since then, he has been travelling between worlds collecting rare weapons and challenging worthy enemies to battle.

In Dissidia 012 Final Fantasy, Gilgamesh is seeking Bartz, wishing to challenge his old rival to their promised rematch. Though he is treated as a villain, Gilgamesh is an outsider to the cycles of war, and it is left ambiguous as to whether he was summoned by Chaos or just happened upon World B and the cycles of war by chance while traveling between worlds.

To unlock him as a playable character, the player must beat the Dissidia 012 Final Fantasy storyline, then complete the first chapter of the 013 story. The player will need to go to the Reports section and beat the sixth scenario in Report 8 with Bartz to unlock Gilgamesh in the PP Catalog as a purchasable character for 300 PP.

Gilgamesh's appearance is based on his original artwork ( 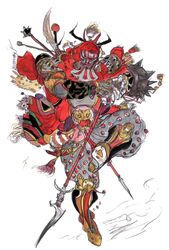 ) by Yoshitaka Amano for Final Fantasy V, which, in turn, is based on a design ( 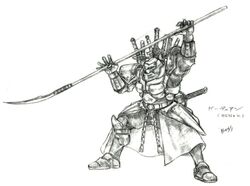 ) by Tetsuya Nomura who designed enemies for that game. He wears primarily red and gray armor with yellow accents, gray shorts with red polka-dots, and a horned hood. 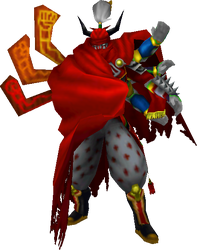 ), where he has lighter armor and a red cloak that obscures most of his head and face. During EX Mode, his appearance is stated to be based on his Final Fantasy XII design ( 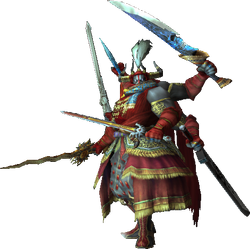 ), though it more so resembles his Master Creatures figure ( 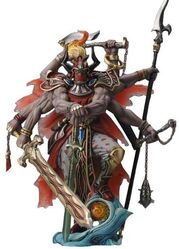 Gilgamesh's second alternate outfit, "Special Steel Armor", is based on his recurring ( 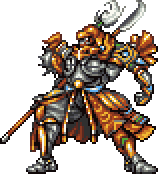 ). Gilgamesh wears heavier full-plate armor on his torso and arms with a hornless helmet. The lower half of his head is partially covered by a golden neck guard. His EX Mode is recolored to match his morphed appearance (

) in Final Fantasy V while in the Interdimensional Rift, giving him darker skin, purple wrist guards, and black and red armor with purple jewels. 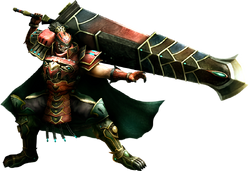 ) in Final Fantasy Type-0. He wears black and red turtle-themed armor, with a black tunic flaring down from his waist. His helmet obscures most of his face, and lacks horns. His armor has a zipper on its back, which didn't appear in his Type-0 appearance. Gilgamesh's EX Mode is modeled after his True Gilgamesh (

Gilgamesh does not have a role in the main story, but does appear in two Reports where he resembles his typical Final Fantasy V appearance: overconfident, clumsy yet an honorable fighter. Gilgamesh retains his love of swords and desires to collect all the characters' swords. He sees Bartz as his biggest rival whom he aims to overcome. Since he was not summoned to the world like the others, Gilgamesh retains all of his memories.

Gilgamesh's quotes directed towards other characters often portray his desire either to steal their weapon, or to have an enjoyable and even fight with them. His quotes directed at no one in particular are challenging and threatening towards his foe. The cowardly aspect of his personality is less represented, with the exception of one or two death quotes.

Gilgamesh was not summoned to World B, but instead stumbles upon it by chance and, in contrast with everyone else, retains his memories. Wandering the depths of the Rift, Gilgamesh finds himself at Pandaemonium. Sensing the presence of his old rival, Bartz, Gilgamesh hears someone coming up behind him. He turns around, announcing his return to Bartz, only for Squall, Zidane and Vaan to appear instead. Much to his confusion, not one of them remembers him from his visits to their respective worlds, due to the memory loss caused by being summoned to the cycles of war.

Realizing Bartz is not among them, Gilgamesh walks off, leaving the three confused. After he disappears, Bartz arrives, asking if he missed anything. Zidane asks if he knows Gilgamesh, describing the swordsman's appearance. Suffering from the same memory loss as the others, Bartz doesn't recall Gilgamesh, and denies knowing such a person.

Some time later, a wandering Gilgamesh has a short fantasy of how his rematch will play out with Bartz once he finds him. In this fantasy, the rematch ends in his favor, with Bartz praising him while Gilgamesh enjoys his victory. Sensing Bartz shortly after, coming to at the Rift and confused how he got there, Gilgamesh emerges from a portal landing on the ground in front of Bartz. He assumes a kabuki pose as Bartz begins remembering him. Deciding he doesn't recognize Gilgamesh after all, Bartz walks off noting Gilgamesh as being "weird".

Crushed by his rival's nonchalance, Gilgamesh reintroduces himself, trying to figure out why Bartz doesn't remember him. Repeating the speech he had fantasized shortly before, he explains he has traveled to many worlds, and finally returned to get his promised rematch with Bartz. A confused Bartz is persuaded into fighting Gilgamesh, and wins.

Surprised Bartz has also been honing his skills since their last meeting, Gilgamesh declares the battle is only the beginning, for Bartz to point out he's fading. To Gilgamesh's dismay, a portal opens beneath his feet and Gilgamesh is sucked back into the Rift, swearing to return for a true rematch against Bartz someday. Bartz notes something familiar about Gilgamesh, and muses that they will probably meet again.

In two Official Quests, Gilgamesh finds his way back to World B to seek out Bartz. He finds Exdeath and mistakes him for Enkidu, much to Exdeath's irritation. Gilgamesh rejoices in being reunited with his "friend" and challenges him to a sparring match, but through the fighting regains his memories and realizes who Exdeath is. Shortly after, a portal to the Rift opens and consumes him.

In the second quest, Gilgamesh comes across Prishe on patrol. Prishe asks Gilgamesh if he is a warrior for Chaos or Cosmos, and Gilgamesh, unaware of what she means, declares himself a "chaos warrior" as a veteran of battle. Gilgamesh tells Prishe he is looking for his archrival, and Prishe assumes, as he is a warrior of Chaos, that he means her. The two do battle, and Gilgamesh is again pulled into the Rift. Prishe would report the sighting to Shantotto, which would inspire her to seek a way to enter the Rift to escape the cycles of war. 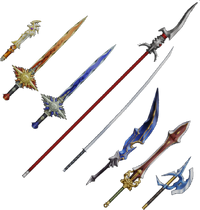 Gilgamesh is described as a Frenzied Swordsman, where he picks a weapon at random when attacking making the strength and effects of his attacks unpredictable. Whenever he attacks, there is a 15% chance of Gilgamesh using the Excalibur, Excalipoor, Zantetsuken or Genji Blade, and a 10% chance of him using the Masamune, Naginata, Chicken Knife and Battle Axe.

Gilgamesh is mostly a mid to melee-range fighter, with quick close-range attacks and slower charging mid-range attacks with a handful of magic attacks that have decent range. His ranged attacks in particular remain unaffected by his fighting style, as they do not require the use of any of his weapons. His HP attacks are versatile across range, but he moves slowly, and the unreliable nature of his fighting style means his attacks have inconsistent power and range.

The weapons and their special abilities are as follows:

Gilgamesh is fought as a boss in Report 8, Side Story: The Roving Swordsman. He must be fought using Bartz, and defeating him unlocks him as a playable character that can be purchased at the PP catalog. 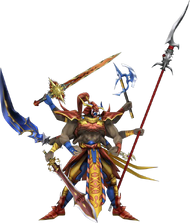 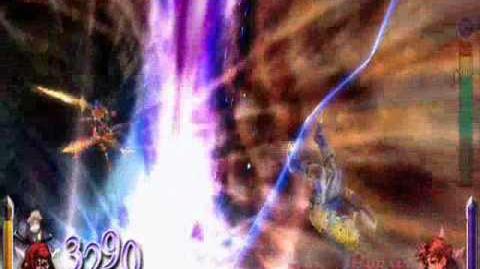 Gilgamesh's EX Mode is Gilgamesh Morphing Time, in which he transforms into his true form (

) as seen in Final Fantasy V, giving him eight arms, different armor and a monstrous-looking helmet. While in EX Mode, Gilgamesh gains the ability "Octo-Break", which causes each arm to wield any of the eight weapons used by him in battle—he has a 45% chance of wielding eight of the same weapon, a 45% chance of using four weapons twice each, and a 10% chance of a random alternate combination.

Whatever weapon(s) Gilgamesh is holding, their relevant bonuses are applied to all his attacks, while weapons that affect his attack power alternatively activate their effects. Thus the benefits of Gilgamesh's EX Mode are impossible to predict, but his attacks are more reliable. Gilgamesh's melee Bravery attacks do more hits, and some of his HP attacks hit over larger areas.

Gilgamesh's EX Burst is Strongest Sword, where eight swords circle in front of him. The player has to select Excalibur, which is the red sword. If the player selects correctly, Gilgamesh attacks the opponent five times, then ends the EX Burst with Ultimate Illusion, where he leaps into the air and slams his sword down, creating a shock wave that deals HP damage. If the player selects Excalipoor, it will deal Bravery damage of 1 with Gilgamesh looking at the sword, realizing it is not Excalibur, and throwing it away, landing it onto the opponent dealing HP damage.

Concept art of the Genji Blade.

Concept art of the Zantetsuken.

Concept art of the Chicken Knife.