A bard who sang his stories to the masses. In the time before airships, he played a vital role in the spread of information. However, due to his criticism of authority and the status quo, he was forced to live a life in exile.

Gilbert is a character and summonable unit from Final Fantasy Brave Exvius. A bard hailing from Grandshelt, his vision can be summoned by Rain and Lasswell to aid them in their battles.

In a time before airships, Gilbert was an inhabitant from the Kingdom of Grandshelt,[1] and bard who sang to the masses about life in faraway lands. As such, he played a vital role in the spread of information, and was treasured by the common folk as a source of information.

However, due to his criticism of authority and the status quo, Gilbert was seen as a threat by those in power. He was forced to live a life in exile, and had to survive countless assassination attempts – none of which could dissuade him from his calling.

Ultimately, Gilbert died a violent death due to the the despots he criticized. Yet, the last breath he took was a song that filled his beloved common folk with the will to stand up to their oppressors. In his death, he left behind a crystal containing his memories, to be summoned by those with the power of visions.

Gilbert's job is listed as Bard. A 3-5★ Rare Summon, his role is that of Support. He has no natural element or status resistances, and weapons-wise, is able to wield daggers, swords, and instruments. As for armor, he can wear Hats, clothes and robes. He can also equip accessories as well. His Trust Master reward is the Dream Harp weapon.

Gilbert's awakening materials are as follows:

Depending on his rarity, Gilbert possesses two (3★), three (4★) or four (5★) ability slots. He has no magic affinities.

Gilbert's stats at his highest levels are as follows (with no passive abilities taken into account), along with the maximum amount of stat points that can be increased through pot-enhancements:

Gilbert's Limit Bursts are of the support-type. 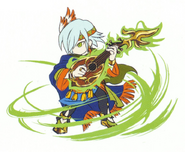