I hope it's worth it!

Gil Toss (げ, Zeninage?, lit. Coin Toss), also known as Zeninage, $Toss, GP Rain, Coin, Spare Change, Money Talks, or GilToss, is an ability that appears in many games in the Final Fantasy series. It is usually associated with the Samurai or Gambler class. It involves dealing damage at the expense of gil. It usually targets all opponents.

Gil Toss would have been an Augment Ability in the 3D version, but was dummied out. The only thing that can be found is a text description found within the data.

Cause damage by throwing gil.

Harley has Gil Toss as one of her commands, it has a Charge Time of 3.

The formula for the cost is as follows:

Zeninage is the Level 2 ability of the Samurai class, and it is the Samurai's default ability. It deals massive damage to all enemies, at the cost of a lot of gil.

Setzer and Gogo can use Gil Toss (GP Rain in the original) by equipping the Heiji's Jitte relic (called Coin Toss in the original). The amount of gil used for Gil Toss is equal to the user's Level x30.

Coin is the Level 2 ability on the Throw Materia, and also provided by Master Command. It allows the player to select an amount of gil to throw, and deals damage based on a tenth of the gil selected. This marks the first time the player can decide how much gil they want to throw. The attack is considered Long Range.

Gil Toss is used with the Gil Toss materia when Zack is in range. He throws money to damage all enemies, losing gil equivalent to ~1% of the total gil. The damage dealt is a fixed percentage of the thrown amount of gil and damages the enemy 20% of the used sum when Gil Toss is mastered. Gil Toss requires no AP to use.

Amarant can use the Flair ability Spare Change to throw money at a single enemy, or all of them when Amarant is in Trance. The ability is learned from the Poison Knuckles and Rune Claws for 90 AP. More Gil is used the higher level Amarant is, and more damage is done the higher Amarant's Spirit is, but the more Gil the party holds overall, the less damage Spare Change does, making it diminishing returns toward the endgame.

Spare Change is a Special ability found in Rikku's section of the Sphere Grid. Every 10 gil thrown inflicts 1 point of damage, and up to 100,000 gil can be thrown at once, which will deal 9,999 damage. The damage is considered neither physical or magical, instead falling into the "special" damage category.

Spare Change is an ability learned by the Samurai dressphere for 20 AP. It targets one opponent.

Damage done via Spare Change is equivalent of:

Gil Toss is available as a Technick. It can be bought for 2,000 gil at Rabanastre, Nalbina Fortress and Jahara and unlocks with 35 license points. 1 gil equals 1 damage point, and the amount of gil thrown is the sum of current party members' HP divided by the number of enemies in range. Gil Toss is considered physical damage and thus is nullified against enemies who put up a paling. The damage caps at 9,999 each toss.

In the Zodiac versions, Gil Toss is found on 70F of the Draklor Laboratory or the Pharos - Second Ascent. The license costs 30 LP to unlock and can be used by the Machinist, Archer, Bushi, and Shikari, although the Shikari needs to acquire the Esper Mateus license first. Damage is still capped even if the general damage cap was lifted for the Zodiac versions.

Gil Toss is not an ability usable by the party, but the Yojimbo enemy can unveil its bag of gil to do damage to the party. This may allude to the Samurai job class in general, as Gil Toss is associated with samurai in the series.

In Final Fantasy XV: Comrades, the player can obtain a katana called Zenigiri that grants the ability called "Spare Change" that uses up gil to damage one enemy.

Gil Toss is a Juggler ability learned for 100 AP from the Jack Knife. It does 30 damage every time and costs 30 gil to use each time.

Gil Toss is a Juggler ability that does varying damage based on the amount of gil thrown, selected by the player from the amounts either 10, 100, 1,000, or 10,000 gil. It can be learned for 100 AP from the Jackknife, and targets enemies in range of four squares.

Money Talks is the last ability learned on the Merchant Job. It costs 1,000 gil to use and its damage is equal to 1% of player's current gil.

Spare Change is an ability usable by Locke (level 35) and Vaan (level 10), and costs 10 CP to equip. During Battle Music Sequences it damages the second enemy to enter based on the player's current score, but reduces their score afterwards. The Millionaire's Tome item allows any character to learn Spare Change.

Spare Change is a reactive ability that costs 15 CP to equip. It is activated after second enemy appears in Battle Music Sequences (BMS). It deals damage relative to current points and total points will be decreased. It is learned by Edge (level 45), Galuf (level 50), Edgar (level 25), Rinoa (level 50), Laguna (level 75), and Vaan (level 45). It can be taught to any character by using the Millionaire's Tome.

Gil Toss references a popular series of Japanese novels from the 1930s about a policeman in the Edo period named Zenigata Heiji, who captured criminals by throwing coins at them. The concept has appeared in various forms of Japanese media, including anime, manga, and video games. Like Gil Toss, this influence would be used for the Takeover/Flash the Cash (テイクオーバー, Teikuōbā?) ability that appears in Square Enix's Bravely series, which has the user inflict damage by throwing their currency at a target.

Gil Toss is a popular attack for people who use a cheating device or glitch to gain infinite gil, causing unbelievable damage to an opponent. An example would be in Final Fantasy X-2: if the Samurai dressphere is used and the accessory Invincible (which removes the 9,999-damage cap) is equipped, all the player needs to do is simply use Spare Change and contribute all of their gil. This tactic, which also works in other games, is often used to defeat strong enemies in a matter of seconds. 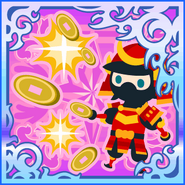 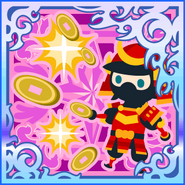 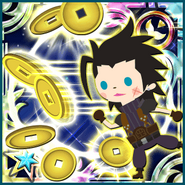 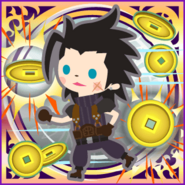 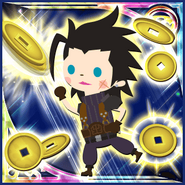