Various
Gigas is the general term for enormous members of the Gigas, Giant, and Jotunn tribes. Groups of these giants can be found roaming the island of Qufim. As their appearances imply, the Gigas do not possess much in the way of intelligence. While they do possess a language, it consists of the stringing together of simple words or phrases. Their language is often unintelligible—even by members of their own kind. However, what they lack in intelligence is made up for in brute strength. Also, while not as advanced as that of the allied forces, their ship and castle building abilities are comparable to those of the Orcs or Yagudo.

The Gigas were originally from an island far to the north of Quon. Every few decades, the Gigas send a large ship to Qufim Island to attack the Hume settlements. Their goal is to retrieve supplies and slaves to take back to their homeland. Before the Great War, the Shadow Lord recognized the potential that lay in the giants, and hired a large number of them to fight as mercenaries.

After helping to construct Castle Zvahl, the Gigas led the beastman frontline in laying siege to many of the allied forces' fortresses. However, when the beastmen lost the war, the remaining Gigas were left trapped, unable to return to their homeland in the north. With nowhere to go, they set off for Qufim and Delkfutt's Tower, where they remain today--out of reach of the allied armies. 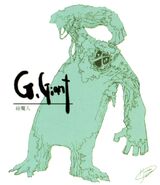 Unused concept art of a Gigas. 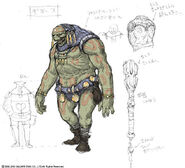 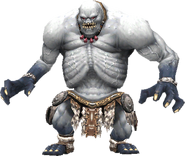 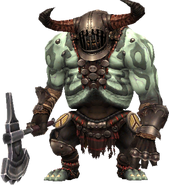