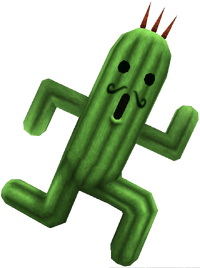 Some Cactuars live long lives and grow huge. This Jumbo Cactuar is one of those.

Gigantuar (ジャボテンダー, Jabotendā?, lit. Juctuar), also known as Jumbo Cactuar, is a recurring boss in the Final Fantasy series ever since its debut in Final Fantasy VIII. It is an enlarged Cactuar, usually towering over the party, and as a trademark often sports a curled mustache. As the Cactuar's trademark attack is 1000 Needles, the Gigantuar uses "10000 Needles", and in games where the HP limit exceeds 9,999, it may even have "99999 Needles".

The Gigantuar is a boss exclusive to the Advance and 2014 versions, found in the desert south of Maranda in the World of Ruin after the player has slain 10 Cactuars. When defeated it transforms into the Cactuar magicite.

The Jumbo Cactuar appears on Cactuar Island—reached via Ragnarok—visible on the overworld map and engaging the party when approached. It grants the party access to the Cactuar Guardian Force when defeated. It has a unique Renzokuken sequence for Squall's Limit Break and can flee at low health. If it flees, the party must find it again and start over.

The Jumbo Cactuar is a normal enemy fought at Bikanel in Chapter 5 and in the Via Infinito on floors 50 through 59.

The Gigantuar is the target of Mission 54.

The Gigantuar is a normal enemy found on the Archylte Steppe. The stronger Metal Gigantuar can also be found on the Steppe, but as a rare enemy appearing as a time distortion on the field.

Gigantender is a type of enemy introduced in Shadowbringers most commonly found in Amh Araeng. It differs from the usual depiction by having shorter legs, longer arms, and a canopy of smaller arms atop its head, some of which take the shape of sabotenders. These features make it top-heavy, resulting in Gigantender stumbling while attempting to make the traditional Cactuar pose.

Players can purchase a "Micro Gigantender" as a minion from the FATE merchant in Twine.

Gigantuar is fought during the In the Drylands, It Rains Spines Hunt. It employs fixed-damage (1,000 HP) attacks and has high HP. It looks the same as a normal cactuar, only bigger, but the gigantuar fishing lures sport a mustache.

Main article: Jumbo Cactuar (My Life as a King)

The Gigantuar appears as an optional post-game superboss fought in the Gladiators' Hall. Each time it is defeated, the party gets between 1 to 3 Moogle Coins. Gigantuar levels up every three times it is defeated, up to a maximum level of 6 after being defeated 15 times.

It is the only enemy in the game to be sprited in the 16-bit style in the remakes. 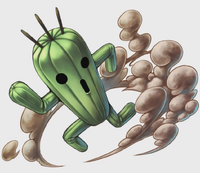 The Gigantuar is an earth-elemental Eidolon for Wrieg and Maina. Wrieg's version of the signet teaches him Thousand Pricks abilities, while Maina's version teaches her Hastega abilities. Both artworks of the summon take inspiration from the summon's multiple appearances in the series.

The Gigantuar and variations thereof are common marks in Hunts. Their defeat yields two Hunt Tokens per attempt, exchangeable for consumable loot in the Hunts Token Exchange.

Despite being as tall as a building, this incredibly rare specimen boasts all of the speed of its smaller brethren, and will flee when pressed - but only after first gifting you with a face full of its needles.

The Gigantuar appears as an enemy during Battle Music Sequences.

Gigantuar is a mini-boss that spawns in Mirah Dunes after defeating a few Cactuars. After doing so, the player can use Summon Gigantuar as a Crystal Surge, which spawns a Gigantuar somewhere in the area.

Gigantuar are a type of Mirage from the Cactuar group. They can be transfigured from a Cactuar after level 25 or switched to a Gigantrot board after acquiring the Gigantrot Memento.

Gigantuar can be found in Mako Reactor 0 and become imprismable by landing critical hits.

The Gigantuar appears on Triple Triad cards in the version available via Final Fantasy Portal App.

Gigantuar is a portmanteau of "gigantic" and "cactuar."