We'll stop this monstrosity. The fate of the world depends on it!

The Giant of Babil, also known as the Giant of Bab-Il or Babel, is a machine of tremendous power in Final Fantasy IV and is so large it actually serves as a dungeon.

Created by Zemus and other radical Lunarians, its purpose is to destroy the human race on Earth so the Lunarians can colonize the planet. The other Lunarians rejected this design and sealed the Giant in the Lunar Subterrane.

Through Golbez, Zemus gathered the eight Crystals at the Tower of Babil to transport the Giant to Earth. It is brought to the planet and unleashes an attack, but a pincer attack from the forces of the Overworld and Underworld stalls it. Cecil Harvey, Fusoya, and their allies penetrate into the Giant. Along the way, they are confronted by the Archfiends who were resurrected by Zemus. The party battles the Archfiends and defeat them for good. Moving on, they battle and destroy the giant's CPU.

After the party destroys the CPU, Golbez confronts the party for destroying the CPU and Fusoya frees Golbez from Zemus' control. Now free from Zemus' control, Golbez reveals that his father is Kluya, shocking the party especially Cecil who realizes that Golbez is his own brother. Fusoya and Golbez leave the giant to confront Zemus. The giant begins to explode and Kain, free from Golbez's control, leads them to the exit. Edge does not trust Kain but he follows him since there's no other choice. After the party exits the giant, it explodes, destroying it for good.

It is accessible from the exit back in the giant's inner passage, just after the save point. Midway, the four elemental archfiends have been resurrected and attempt to slay the party, only to be defeated again. To fight Geryon, the player may prompt the very same spot after this battle, which says that the four fiends' malice remains anchored to it. Geryon may then be fought multiple times.

The control core is accessible from the exit back in the giant's Inner Stair. It is the heart of the giant, and is the final room of the dungeon. The party must take out the CPU and the Attack and Defense Nodes to shut down the giant. Afterwards, Golbez appears and Fusoya brings the enthralled Golbez back to his senses. Golbez then reveals his and Cecil's origins and why Zemus was able to control him. Fusoya and Golbez then leave the group, heading for the Lunar Subterrane to finish off Zemus. As the giant is collapsing, a now-free Kain shows them to the exit.

This shop only appears in the 3D versions, right at the save point inside the Giant of Babil. The merchant is an NPC that takes the appearance of Namingway.

In the 3D remake, after beating the game once, returning to the area where Cecil fought the four Elemental Archfiends allows for a new boss battle with one of the superbosses, Geryon.

A prototype of the giant, Proto-Babil, appears as a superboss as well. It is only fought on a second or third play-through with the player carrying Dark Matter, stolen from Zeromus, and using it on the stone face on the Red Moon. Proto-Babil is considered the most powerful boss. Yoshitaka Amano's art of the Giant resembles the recurring summon Alexander, particularly the incarnation seen in Final Fantasy VI. In the battle with Proto-Babil, it uses Alexander's signature attack, Divine Judgment.

In Final Fantasy IV: The Complete Collection, a new post-game boss called Lost Babil was added. The player must talk to Challengingway in the secret location on the True Moon.

To face the boss, the player must pay him a fee of 500,000 gil and Challengingway will offer the player a reward consisting of three Silver Apples and two Soma Drops if they defeat Lost Babil. The player must create three parties to fight three boss battles; one against Lost Babil's torso, and another against his head; the last encounter is against the Lost Babil's CPU, which has six nodes accompanying it.

The Giant of Babil appears as one of several new summons. When summoned it uses Lunar Ray to subtract 30% of each character's Bravery and add it to the Bravery Pool. It can be purchased from certain Moogle Shops for 120 KP.

"Within the Giant", the song that plays inside the Giant of Babil appears as a Dark Note.

The Babil enemy in Final Fantasy XII is an allusion to the Giant of Babil, as "When they descend to the earth from their home in the heavens, they strike swiftly, and with malice apparent", where the Giant of Babil is a powerful weapon that is used for destruction.

Inside the Giant of Babil (PSP).

Concept art of the Giant of Babil (3D). 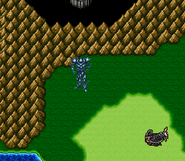 The Giant of Babil makes its appearance (SNES). 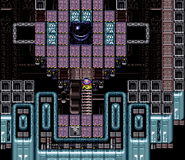 The control center of the Giant of Babil.

Artwork of the Giant of Babil and its CPU by Yoshitaka Amano.

Artwork of the assault on the Giant of Babil from the Final Fantasy IV official novelization by Akira Oguro.

The Giant of Babil in a cutscene (PSP).