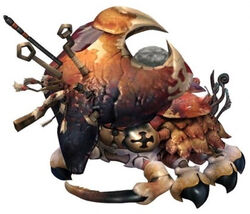 The Giant Crab (ジャイアントクラブ, Jaianto Kurabu?) is an enemy in the Final Fantasy Crystal Chronicles series. It dwells in the waterfall of the River Belle Path. It is a crab (or crab-like monster) that is significantly larger than normal crabs. It is a beast with scars and wounds from past battles, as well as several weapons sticking out from its carapace.

The Giant Crab appears in the River Belle Path as the boss of the dungeon. The Tipa Caravan must defeat it to receive their first drop of myrrh. The Giant Crab is also assisted by Reaver Mus, though far weaker than the Giant Crab alone. A first appears once the Giant Crab is first struck with an attack. Others then appear individually at set intervals during the battle. As it takes damage, it will first lose its scythe-like smaller claw at around 2/3 health, and then its larger claw at about 1/3 health. Losing its smaller claw causes it to start spitting Slow bubbles more often, while losing its large claw will have it switch from firing Thunder spells as projectiles to casting Thundara on the battlefield.

The Giant Crab also appears in Final Fantasy Crystal Chronicles: Ring of Fates in the same capacity: boss of the River Belle Path, which appears as a bonus dungeon unlocked in both single and multiplayer modes upon completion of the game.

The Giant Crab appears in Final Fantasy Crystal Chronicles: Echoes of Time once again as a boss, appearing in his original colors. The fight is identical to that in Ring of Fates.