An axe with a large head. Much bigger than the traditional woodman's axe, hence its name.

Giant's Axe (巨人の斧/きょじんのおの or ジャイアントアクス, Kyojin no Ono or Jaiantoakusu?, lit. Giant Axe), also known as Gigantic Axe, Giant's , Giant Axe, and Double Axe, is a recurring axe in the Final Fantasy series. Much like the Gigantaxe, it is a powerful, high-end weapon usually obtained late in the game.

Gigantic Axe is exclusive to the 3D version and the most powerful axe. It can only be used by Warriors after their job level reaches 99. It has an Attack Power of 155, and grants +20 Strength.

Though the equipment is exclusive to the Warrior job, during the ending credits, Refia is seen wielding it as a Viking.

Huge axe once used by giants. Can be used two-handed.

Titan's Axe is an axe that can be found in Istory Falls and stolen from Twintania. It provides 91 Attack and 90 Hit Rate.

The Giant Axe is a

Warriors. Based on the weapons wielded by giant enemies, it can be purchased in the Manderville Gold Saucer for 100,000 MGP. It has no stats and is intended solely for glamours.

Giant Axe is a low-level weapon that provides 12 Attack. it can be bought for 4,000 gil at an Outfitter after meeting with Alphonse Delacroix at Lionel Castle in Chapter 2 or poached from Wisekin.

Giant Axe is a high-level axe, providing 111 attack power, +10 to Attack and Strength, -10 to Wisdom and Intelligence, -5 to Speed, and is effective against humans and plants.

An axe dropped by a giant...or rather, a plain axe of bigger size than the standard. Its destructive power corresponds to its great size, rendering it capable of dealing a considerable amount of damage when swung with momentum. However, since the blade carries most of the weapon's weight, those powerless to handle it correctly may see the blade return full circle in their direction. Perhaps the strength of a giant is required to wield this axe after all.

Giant's Axe is an Axe obtained by buying it for 5,400 gil at Underworld Gaberada, by crafting it using 1,080 gil, x3 Broken Blades, x14 Mythril Ores, and x3 Lumbers, by completing Intermediate A-5 in the Colosseum, and by finding it at Aquatic Cove. It provides 50 ATK.

Normal people can use it.

The Giant Axe appears as a 2-handed axe within the Forsaken Dungeon. It provides 69 Weapon Atk, 12 Durability, +20 Defense, -10 Speed, -5 Consumption Rate, and -5 EXP Gain Rate. Only Masuda Koji can equip this weapon.

Giant's Axe is a hammer that can be equipped by Kamo.

A massive, single-bladed axe said to have been favored by a legendary race of giants. It is extremely thick and heavy, and its terrible destructive force is only matched by the terrible difficulty of wielding it. An amusing legend tells of how it was once used as a ship anchor back in the Golden Age of Piracy.

In Bravely Default, Giant Axe is an axe that provides 58 P.ATK, 60 Aim, and -3 Critical. It can be stolen from Gigas Lich at Everlast Tower.

In Bravely Second: End Layer, Giant Axe is an axe that provides 55 P.ATK, 60 Aim, -3 Critical, and deals 50% more damage to plantoids. It can be found in Everlast Tower. 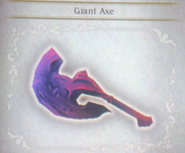 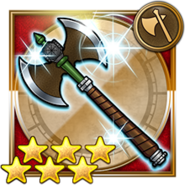 This gallery is incomplete and requires Final Fantasy Dimensions added. You can help the Final Fantasy Wiki by uploading images.
Edged weapons
Community content is available under CC-BY-SA unless otherwise noted.
Advertisement