The Gi Nattak is a boss in Final Fantasy VII fought in the Cave of the Gi. Gi Nattak is accompanied by two Soul Fires, but is stronger than them. It is the ghost of the tribe leader, who decided to attack Cosmo Canyon in a war against Red XIII's species.

Nothing
Wizer Staff (100%)
Nothing

Gi Nattak is undead, meaning curative spells and items harm it. The two Soul Fires that fight alongside it will use Fire2 to heal themselves and can possess the party to cast the same spell from inside them periodically. It uses a physical spear attack, and Drain and Aspil to drain HP and MP from the party. If someone has the Barrier status, Gi Nattak uses DeBarrier. As an undead Gi Nattak is weak against Holy damage, but at the point it is fought the player does not possess a means to deal such damage.

Since Gi Nattak is undead, a simple strategy is to use an X-Potion, Elixir or Megalixir on it to kill it instantly. A Phoenix Down and the spell Life will work as well, though it might miss because there 25% chance of working.

To take on Gi Nattak without the use of curative items, the player should equip a Fire Ring and Elemental Materia joined with the Fire or Ifrit Materia to characters' armor before commencing battle. Ice2, Bolt2, Ramuh, and Shiva are effective. Cure2 or White Wind also harm Gi Nattak, but will heal the Soul Fires (White Wind also inflicts Slow on the Gi Nattak). However, as the player should concentrate on dispatching Gi Nattak, this shouldn't be a concern.

Use Aspil on Target
Use Spear Attack on Target

}
1/5 Chance: Use Spear Attack on Target

Use <Spear Attack> on Target

Use <Spear Attack> on Target

Gi Nattak is a boss in the knight's path of the Final Fantasy VII event The Gold Saucer. He fights with a Soul Fire. 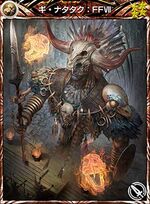 Gi Nattak is similar to Wrexsoul from Final Fantasy VI. Both are said to be monsters formed from the composite souls of those killed in a war, and Wrexoul itself is able to enter the body of a party member. They are also both accompanied by will-o-wisp entities, Soul Savers being the Final Fantasy VI monster's companions.

In traditional Japanese folklore beliefs, souls that died in a sudden or violent manner, or ones that did not get the proper burial rituals performed upon them, may linger in the physical plane as yūrei, analogous to Western legends of ghost. Yūrei are frequently depicted as being accompanied by a pair of floating flames or will o' the wisps that are separate parts of the ghost rather than independent spirits. This boss may have been inspired by such folklore.

Gi Nattak's name may originate from Hindi, where the word natak means drama or play.