Ghrahs have an elemental alignment indicated by the color of their glowing core. Ghrahs appear in 4 different forms: Ball (Black Mage), Bird (Thief), Spider (Warrior), and Humanoid (Paladin). Ghrahs will still cast magic in any form, however. Most Ghrahs alternate between Ball and one other form particular to that Ghrah every 60-75 seconds. In the "Ball" form, Ghrahs are not aggressive. When not in Ball form, Ghrahs aggro by True Sound. Neither form links. 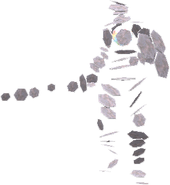