Spirits that drift about the train graveyard. These troubling pests set upon passerby and cause mischief as well as harm—to what end, no one knows.

Ghost is an enemy in Final Fantasy VII Remake, found in the Train Graveyard during Chapter 11, "Haunted". They are the spirits of children that were taken by Eligor.

Pass Through the Maintenance Facility, Back Amongst Friends

Ghosts are the trickiest normal enemies to fight on the Train Graveyard, as they alternate between repelling physical and magical attacks. The ghosts are most susceptible to

Subversion Materia is worthwhile for its

Manaward on the party halves damage from the ghosts' attacks.

An easy way to deal with Ghosts is with the

Magnify Materia takes them all out in move.

In hard mode, Aerith can use normal attacks and Ray of Judgment to deal magical damage without expending MP. For the battle around the turntable, it is better to preserve MP however possible.

Prayer Materia is preferable for healing. Aerith should use Soul Drain and cast spells paired with 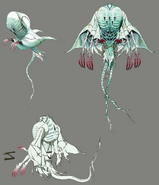