A restless incorporeal spirit. A mere touch may suck the life from its target, causing debilitating status effects.

Ghosts in Final Fantasy Tactics are a genre of undead enemies. They float one space above the ground and can teleport within their enormous movement range. Being undead creatures, they absorb Dark-elemental attacks and are weak to Fire and Holy. They are among the most evasive monsters. They can be healed by Life's Anthem and Chakra.

Ghouls wear yellow robes, which are left behind upon their death.

Ghasts are cloaked in red and have a bit more HP than Ghouls. The least dangerous type of ghost.

Revenants are definitely the most dangerous of their breed. They have a wider movement range than both the Ghoul and Ghast and know Drain Touch. They have higher HP than other ghosts.

The damage formula for Ectoplasm is as follows:

The formula for success of status attacks are as follows: 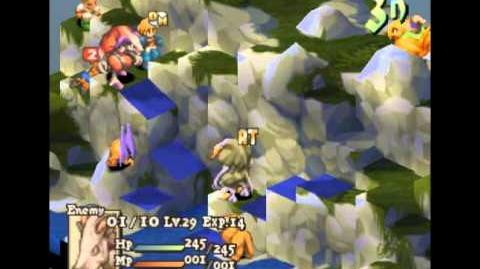 Ghosts are the only monsters that have the ability to ride chocobos. Though the enemies in the game will never do this, a player can mount an allied ghost onto an allied chocobo. However, the game does not have a chocobo-riding sprite for ghosts, so it simply uses a Stopped ghost sprite.

Zombie Touch.
Add a photo to this gallery

[view · edit · purge]Ghasts are a race of creatures in H. P. Lovecraft's Dreamlands.

[view · edit · purge]Revenants are animated corpses or ghosts in Western folklore that are said to return from the dead to terrorize the living. The word "revenant" is French (Fr. revenir, "to return") and means "one who returns".