Methods do not interest me. Only results.

Judge Ghis is an antagonist in Final Fantasy XII. He is a Judge Magister, the highest military rank in the Archadian military. As one of the more senior Judges, Ghis leads the Imperial 8th Fleet, a detachment of the Western Armada, aboard his flagship, the Dreadnought Leviathan. Ghis is best described as a careerist and a schemer.

Ghis is a middle aged man with curled steel-gray hair and a small goatee. His attire is gold, white and red and lighter than the other Judges', his arms and legs being comparatively unarmored, wearing red leather trousers and arm guards. Ghis's distinctive horned helmet obscures his visage most of the time. He wears a long black cape.

Ghis wields two individual weapons that can be joined at their handles to form a dual-weapon. His primary weapon is a large sword while his off-hand weapon is a dagger-like blade with a half-arch crescent guard and a long protruding blade, with a series of trailing blades that follow down the guard. His weapons are gold to match his armor.

Ghis is arrogant and condescending, frequently taunting the party with the Empire's plans and his own knowledge of their actions to show how powerless they are. He goads Princess Ashe about her desire to restore Dalmasca, declaring her royal bloodline of no value against the power of deifacted nethicite. In the Final Fantasy XII manga, Ghis looks down on Gabranth for his youth and foreign heritage, and when fighting Balthier and Fran, he pauses to explain how his power and experience are superior to theirs.

Ghis is implied to thirst for even greater power, as coveted as his position already is, musing that "blood alone does not make an emperor".

Ghis's men find Princess Ashe under the guise of "Amalia" in the Garamsythe Waterway, and she is taken aboard the Leviathan where Ghis keeps a close eye on her. Soon after he visits the Lhusu Mines in Bhujerba with Marquis Ondore, as the mines are where the Empire gets its magicite for use in Draklor Laboratory. Ghis taunts Ondore in his position as Archadia's lapdog. They bump into Penelo and Larsa, and Ghis becomes outraged at having found an outsider in the mines in the company of the Emperor's potential heir, but Larsa interferes and takes her to safety.

Vaan and the party are sent aboard the Leviathan and encounter Ghis, who tells everyone the woman they thought was "Amalia" is the Princess Ashe. It is implied they mean to use her to seek out more deifacted nethicite, but Ghis is delighted to discover Vaan has the Dusk Shard in his possession as it reacts to Ashe's presence. He confiscates it and sends the party to the brig with the intention of executing them. The party escapes, frees Ashe and reunites with Penelo and Larsa. Ghis cuts them off at the hangar and witnesses the power of nethicite first-hand when his spell is absorbed by Penelo's piece of manufacted nethicite.[note 1] Ghis is defeated and the party escapes on an Atomos. The Dusk Shard is sent to Dr. Cid at Draklor Laboratory.

Ghis captures Ashe's party again at the Tomb of Raithwall, displaying that his dreadnought has the power to fly over Jagd. He now confiscates the Dawn Shard Ashe had salvaged from the tomb and sets out to test its power by placing it in the Leviathan's engine. The results look promising and Ghis descends into delusions of grandeur at the sight of the stone's power, contemplating on using it to take the crown for himself. The shard begins to react violently, and Ghis, along with his entire fleet, are destroyed in the resulting explosion. Ashe and her party escape and recover the now lusterless Dawn Shard.

In the Final Fantasy XII manga, Ghis serves a prominent role earlier in the story, taking charge of the Imperial forces from Gabranth during the attack on the Royal Palace of Rabanastre, and leads a force of soldiers into the Garamsythe Waterway, where Ghis single-handedly destroys a Firemane. He battles Balthier and Fran and overpowers them until he is distracted by Vaan, allowing Fran to get in close to freeze his sword. Ghis's men take Balthier captive, and Fran and Vaan stand down, the three being sent to the Nalbina Dungeons.

After the party is captured, Basch fon Ronsenburg defeats Ghis who laments being "beaten by a mere Landisian". When the party is captured again, Vossler hands the Dawn Shard to Ghis, saying Vayne has agreed to Dalmasca's restoration with Ashe as ruler in exchange for it. Ghis orders the shard tested, but its reaction causes a chain of explosions through the airship. A wounded Ghis tries to deactivate the reactor, but Vossler stabs Ghis's hand, telling him they will die together. The airship explodes and obliterates the rest of the fleet as Ashe and her friends flee in an airship back to Dalmasca. Because the manga was cancelled, this serves as the ending to the adaptation.

The party fights Ghis while escaping the Leviathan after rescuing Princess Ashe. The battle is considered won when the player depletes Ghis's health to critical.

In the Zodiac versions, Ghis is faced alongside the other Judge Magisters in the Trial Mode Stage 100.

"On the Bridge of Leviathan" plays when first meeting Ghis.

"Discord [Imperial Version]" plays during the boss fight against him. 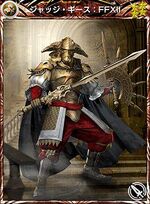 In Dissidia Final Fantasy and its extended universe, Gabranth appears as a playable character. Although none of the other Judges appear, Gabranth borrows Ghis's Aero as a Bravery attack.

In the English version, Ghis voiced by Mark Wing-Davey. Ryūsuke Ōbayashi voices him in the Japanese release. Ghis's voice actor, Mark Wing-Davey, is married to Anita Carey, the voice of Venat. 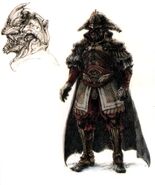 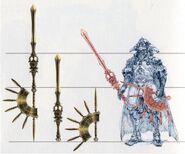 Ghis with the party.

Ghis before he fights the party on Leviathan. 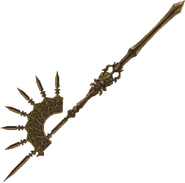 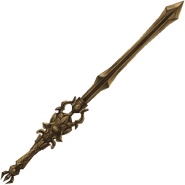