The Ghirofelgo is an enemy in Final Fantasy VII. It takes the appearance of a robust man with blond hair swinging on a pendulum and is fought in the Shinra Mansion in Nibelheim and in the final round of the Battle Square during the time Tiny Bronco is available. When fought in the Battle Square its stats are enhanced with double the regular HP and its Attack and Magic Attack are increased by 25%.

While on the pendulum, Ghirofelgo is capable of attacking the whole party at once for decent damage. Every time he is attacked there is 1/8 chance that he will fall off and be unable to attack for his next three turns, after which he will climb back up the pendulum. He can be defeated instantly by using the Enemy Skill Laser or the spell Demi2.

Choose Self
Use <Catch Chain> on Target
Ghirofelgo's IdleAnim = Swinging 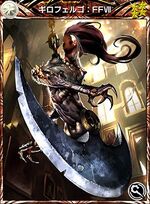 Retrieved from "https://finalfantasy.fandom.com/wiki/Ghirofelgo?oldid=3239050"
Community content is available under CC-BY-SA unless otherwise noted.