Ghidra (ハイドラ, Haidora?, lit. Hydra), also known as Aquaus, Greater Hydra, and Hydra, is a recurring enemy in the series.

Besides being stronger than Hyudora, Hydra casts Level 4 Quarter just before it dies. Unlike Hyudora, Hydra does not absorb Lightning damage and gain HP.

Ghidra is an enemy fought at Ronka Ruins alone and can also be fought in the battle with an Alchymia. It is a dangerous foe as it has Auto-Reflect and battles using Poison Breath and Lightning. It is the earliest that the Blue Magic spell, Level 4 Graviga, can be obtained, and it has the Killer Bow to steal (Ronka Ruins only). If caught by a Beastmaster's Catch ability, it will cast Earth Shaker when released (Earthquake if caught from the Alchymia battle).

The Hydra boss encountered in the trial "A Relic Reborn: The Hydra" uses the "Haidora" spelling usually reserved for Ghidra in the japanese localization, as does the Lesser Hydra enemy encountered in Azys Lla.

Ghidra is a stronger version of the Hydra, having Tri-Attack in addition to the Tri-Flame attack which can hit upwards to three times. 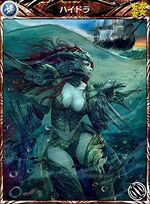 Ghidra are a type of Mirage from the Dualizard group. They can be transfigured from a Bihydra after level 22 or switched to an Trihyde board after level 35.

Ghidra can be found in The Crystal Tower.

[view · edit · purge]Ghidra, also known as "King Ghidorah," is an enemy monster in the Godzilla series. Typically, Ghidra is Godzilla's fiercest opponent, and it usually fights against humanity.