I'd made it out of the frying pan, and into the freezer.

Geosgaeno is a geo-type fiend in Final Fantasy X that appears in the Baaj ruins to threaten Tidus when he looks for shelter in a derelict temple near the beginning of the game. After three turns, Tidus wisely decides to flee. Later on, once the party has gained control of the Fahrenheit, the ruins can be revisited, and Tidus, now accompanied by Wakka and Rikku, can attempt to defeat the boss and enter the Chamber of the Fayth, which houses the fayth of the hidden aeon, Anima.

Geosgaeno can drop weapons with No Encounters, and armor with Auto-Reflect. Since No Encounters cannot be customized to a weapon, only on armor, defeating Geosgaeno is the only way to obtain a weapon with this ability, with a 50% possibility of it dropping one.

When encountered in the beginning of the game, Geosgaeno's every attack halves Tidus's current HP. After attacking twice, the battle will end with a cutscene on the third turn. Because of this, one should not waste turns and Potions healing.

Geosgaeno has an unused attack that would instead remove 15/16 of Tidus's HP. If attempting to kill the monster through use of a cheating device, such as GameShark, it will retain 1 HP and take 0 damage from further attacks until the cutscene plays.

In the later battle, Geosgaeno attacks with Stone Punch, which may cause Petrification. Because the fight takes place underwater, petrified party members will instantly shatter, making them inoperable. When Geosgaeno's HP drops below 50%, it will also use KO Punch to always inflict Curse and may instantly kill a character. The creature has a 95% resistance to Poison, but takes a 10% hit to its max HP per turn if it does get afflicted.

After attacking three times, Geosgaeno will inhale a party member, disabling them. When this happens, all positive status effects, such as Protect or Haste, will be transferred to Geosgaeno, with the exception of Auto-Life. These statuses last up to 10 turns, or block one elemental attack in the case of NulSpells. The effects of Darkness (2 turns), Silence (2 turns), Slow (10 turns), Zombie, Poison, and all four Breaks will also transfer, regardless of immunities. These negative statuses will be removed from the targeted character, except Curse, which Geosgaeno will also ignore. If a party member uses a Candle of Life to inflict Doom on themselves, Geosgaeno will not swallow them. If all party members have Doom, it will use KO punch.

An inhaled character may Struggle with a Trigger Command or defend. If the inhaled does not Struggle, Geosgaeno will exhale the character on its next turn, leaving them with one HP and dealing damage equal to their current HP minus 1 to each party member. If they do Struggle, Geosgaeno will immediately exhale and deal damage equal to their HP, KOing them. Geosgaeno will use Swallow again after attacking 2~3 more times. If a character is swallowed and Geosgaeno is defeated, it will deal 9,999 points of damage to all party members. Along with the three different versions of Regurgitate used by Geosgaeno, there are two other versions that go unused.

It is advised to have armor with Stoneproof and Death Ward. Auto-Phoenix and Auto-Haste ensure Geosgaeno gets only a few turns.

One should never defeat Geosgaeno if a party member is swallowed. A simple strategy is equipping a weapon with any elemental affinity (e.g. Firestrike) onto Tidus and use Quick Hit or, if possible, customize a empty four slot Variable Steel with all four elemental strikes to change into Crystal Sword for Tidus for maximum damage, but it will cost 100,000 gil. Hastega is a good option if the party doesn't have Auto-Haste. Rikku can use elemental crystals and Wakka can use his Overdrive Element Reels.

Alternatively if Spare Change was picked up on Rikku and the player has the extra cash, Geosgaeno can be killed on one turn by tossing 10 times its health at it. Given it has 32,767 health that would be 327,670 gil. The cost can be reduced if the party has charged Overdrives they use before using Spare Change to lower its health. Using a Sensor weapon lets the player see how much health it has and throw 10 times that amount to kill it.

Another possible strategy is to equip either Tidus, Wakka or Rikku with the Evade & Counter armor. When a party member gets sucked in they must not struggle but defend by pressing

. The character with Evade & Counter may also use Guard or Sentinel to nullify Geosgaeno's punch attacks. 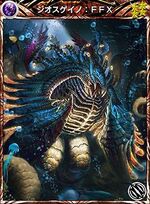 Geosgaeno appears on a Triple Triad card in the version available via Final Fantasy Portal App. 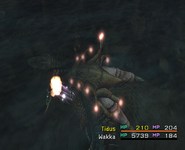 KO Punch.
Add a photo to this gallery

Retrieved from "https://finalfantasy.fandom.com/wiki/Geosgaeno?oldid=3368903"
Community content is available under CC-BY-SA unless otherwise noted.