"A fiend charged with guarding the Bevelle Underground and eliminating intruders. Despite its size, it never attacks head-on. Its magical attacks present the real threat."

"No longer content to attack from afar with magic. Oversouling has enabled it to up the ante and deliver mighty physical attacks as well."

Georapella casts high-level magic at an alarming rate. It is weak against Holy.

The player may want to use a Chocobo Wing to put the party in Haste status. If one has a Warrior who knows Excalibur, she can use it for heavy damage. The other girls should cast their strongest spells and use their strongest attacks.

Casting Reflect on all party members, if available, is useful. Equipping the Shining Mirror Garment Grid and crossing the gate that gives Auto-Reflect is also recommended. 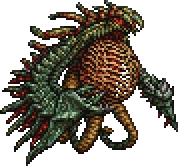